As I mentioned in my previous post we came out to Los Angeles to go to a concert at The Greek Theatre. We of course did other things while we were in town for a few days. Since in addition to the Greek Theatre I also I wanted to go to the Griffith Observatory, both of which are in Griffith Park, I was looking for places to stay nearby. I found this Italian Villa right outside the park, but my husband wouldn’t let us stay there. I mean it did cost twice as much as where we stayed, but at only $400 per night it wasn’t completely out of our price range. He’s too practical for that, so we wound up at The Hollywood Orchid Suites instead.

The Hollywood Orchid Suites are located on a little dead end street that is right off Hollywood and Highland. The entrance to the hotel is right across the street from the loading dock for the giant Loew’s hotel and the Hollywood and Highland shopping center, so you definitely don’t have a view and you could hear banging and trucks backing up all the time when sitting out on the balcony, but I never heard anything inside of our room at least where we were. I gather based on the reviews that some of the rooms closer to the front than ours might have some sound issues. The hotel is actually a converted apartment building, so all the rooms are huge with a completely full kitchen and dining area plus the bedroom and bathroom. If you were going to be in LA for any amount of time it would be a nice place to stay so you could cook. We were only there for a few days so we didn’t use the kitchen. We also had a nice little balcony. There wasn’t really a view of anything, but it was nice to be able to sit outside and our side of the building didn’t get the sun until around 5 pm, so it was nice and shady. There was also a little roof garden. A lot of the reviews say it’s clean but sort of outdated and rundown, but they are in the process of updating all of the rooms. We wound up in one that had already been redone, so it was nice. Nothing amazing, but good enough for us. I expect they’ll be done with the rest by the end of the year. 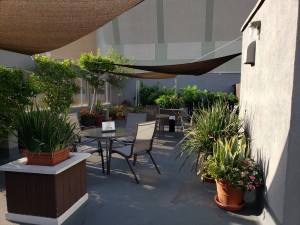 Part of the reason we didn’t use the kitchen was that there was a free breakfast. It wasn’t anything fancy. But as someone who never eats the eggs and bacon parts of hotel breakfast I was perfectly content with what was there. All of the reviews of this place mention how awesome the woman who runs the breakfast area is. They were not lying. She was the best part of the whole place. She is super friendly and really takes pride in her job helping everyone get their breakfasts and chatting with everyone. She gave us a big hug when we were checking out. I don’t think we’ll be back to LA, but if we ever were I would definitely stay there again assuming I couldn’t somehow convince my husband to stay in the Italian Villa.

Thursday during the day we went out to The Getty Center, which is an art museum created by J. Paul Getty. It’s set up in the hills and you can get some excellent views of the city. We managed to spend 2 hours there before we even looked at any of the art. I wanted to go on the architecture tour, but we had just missed one when we got there and had about 45 minutes before the next one. I decided we should just wander around the gardens until the next one. We went on the tour, which was really interesting. After that we grabbed some lunch in the cafeteria before finally checking out the art which includes paintings, decorative arts, photography, sculpture, and illuminated manuscripts. It was a nice little art museum. It’s technically free to get into the museum, but it does cost $20 to park. I appreciated that they said that they give all the kids that come to the museum on field trips a free parking pass so they can bring their families back and have it be a truly free experience. 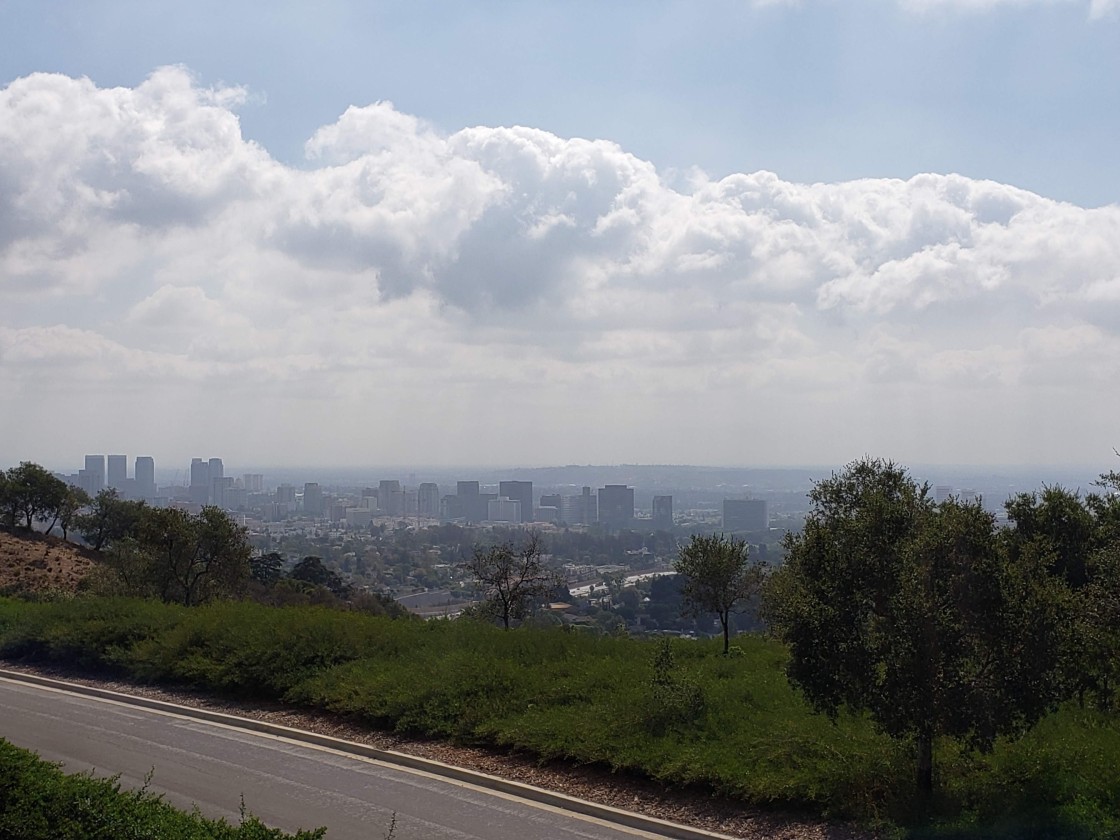 Thursday night was of course the Maggie Rogers concert at The Greek. Friday we headed out to Venice Beach. We started off at the end of the Venice Beach boardwalk and walked down to the Santa Monica Pier and back. On the way I said if the iconic ferris wheel costs $10 or less to ride I think I want to go on it. If it’s more than that I’m not interested. It cost $10, so we rode the ferris wheel. Then I dipped my feet in the Pacific Ocean and we walked back. 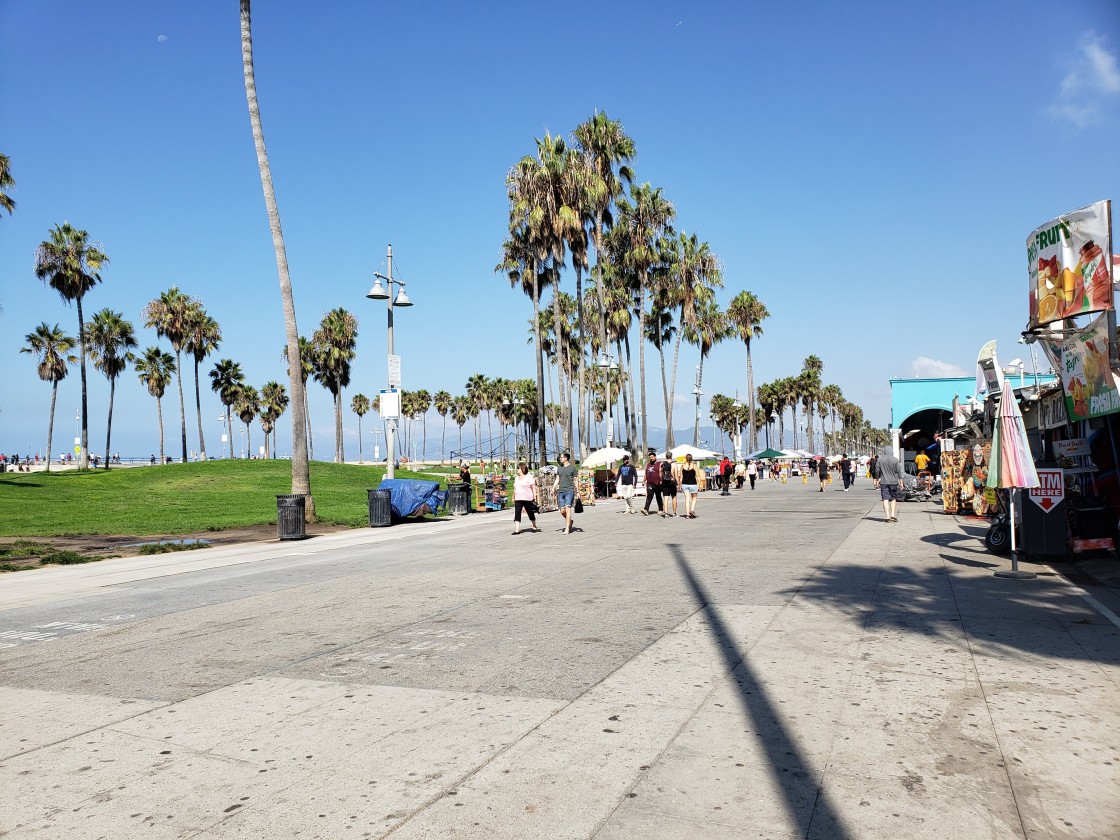 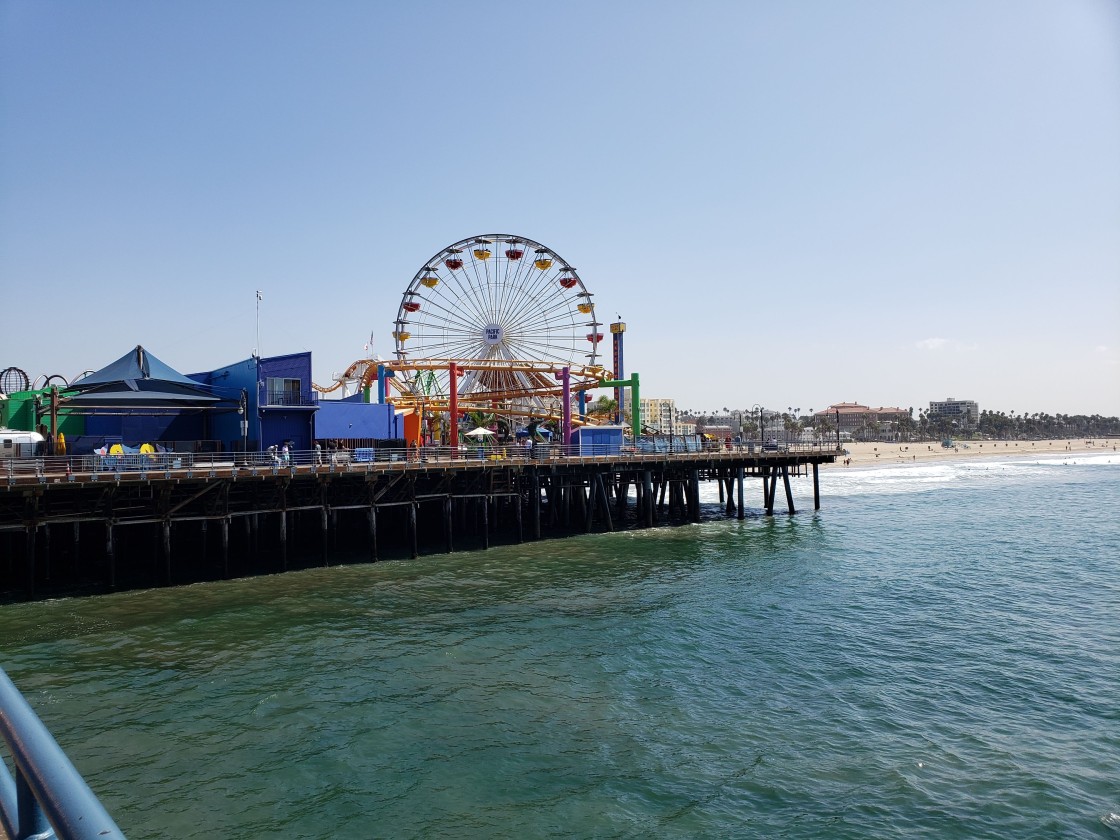 We grabbed some tacos in Venice Beach for lunch. I feel like food is the one part we really failed at on this trip. Those tacos were probably the best thing we ate. Since we were staying in the super touristy part of the city everything right by us was chains and we often didn’t have time to drive somewhere else for dinner in conjunction with our plans. We wound up eating California Pizza Kitchen for dinner before the concert. Though we joked that since it has California in the name it must be a local chain. After the taco lunch I wasn’t that hungry before we needed to leave to go to the Griffith Observatory, so we wound up eating gelato for dinner.

My big plan for Friday night was to go up to Griffith Observatory right before sunset, watch the sunset, and then get in line to view the telescope. My plan mostly failed thanks to their stupid parking. I had looked into this and basically determined it was going to be impossible to park at the observatory, but on nights where there isn’t a concert at The Greek you can park in those lots and walk up or take a shuttle. Then when we got into the park the signs showed there was still limited parking at observatory and the lots for the Greek were closed. So we drove up, but there were a million cars in front of us and once you’re that far there is no way to turn around. You have to drive through the entire park loop and back out again. There was no parking along the road and they wouldn’t even let you up to actual observatory parking lot. By the time we looped back around we could finally park in one of the Greek lots, but I don’t know why they don’t just have them open and let you park in any of them whenever instead of keeping them gated off until they decide you should park there. That added about 30 minutes to our transit time, so by the time got up there we only got the last glimmers of sunset and the line for the telescope was way too long to wait in. We probably wouldn’t have gotten to the front before they shut it down for the night. So we just enjoyed some nice views of the city at night and then walked back down to our car. I think it was still worth it, but also I’m annoyed that their dumb parking situation ruined my perfect plan. I don’t know how you would ever go up there on a night that there’s a show at The Greek Theatre. I don’t recommend trying it. 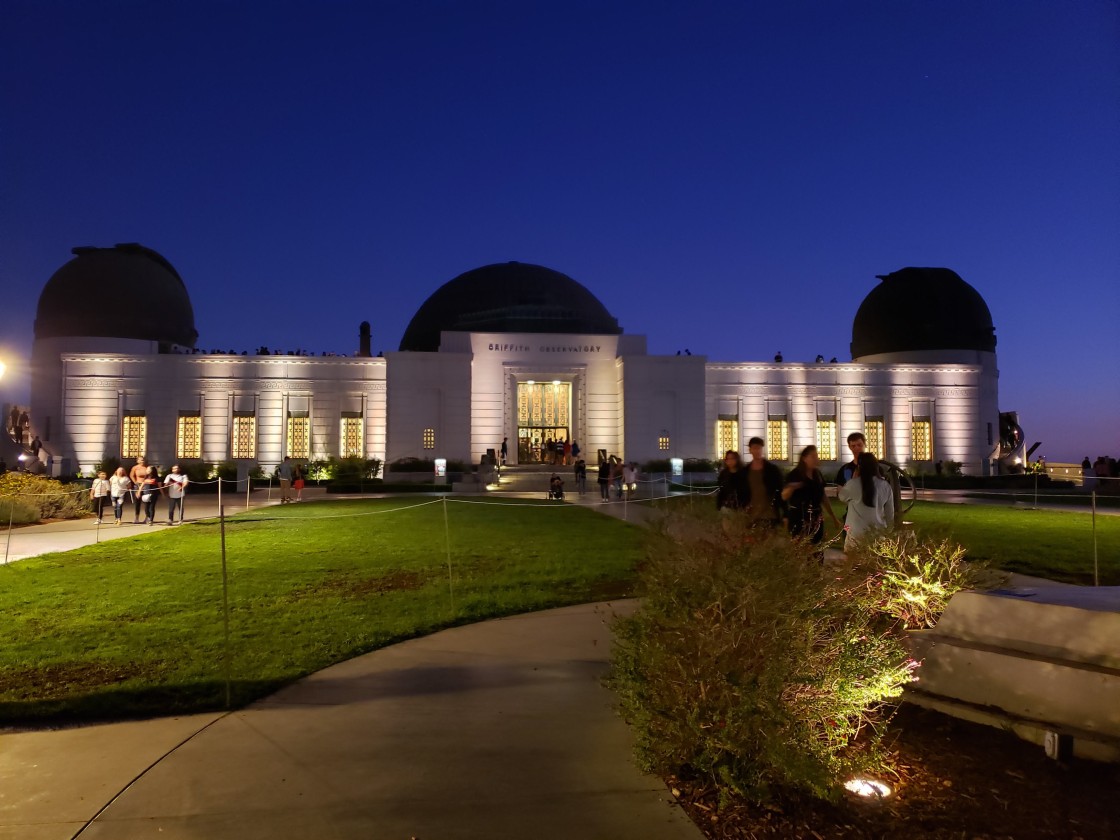 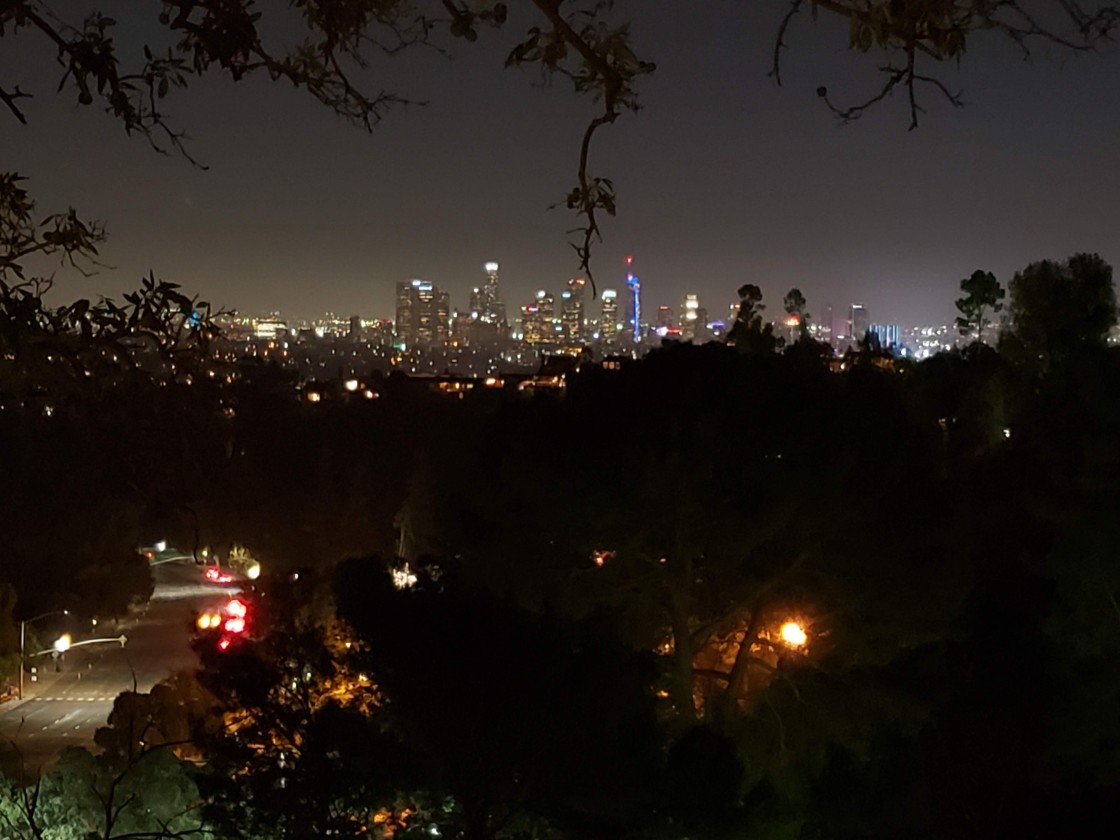 I didn’t have anything on our agenda for Saturday morning since our plane didn’t leave until the afternoon. I wanted to get a little bit of exercise in, so we wound up walking along Hollywood Boulevard and looking at all the stars on the Hollywood Walk of Fame. I had no idea that some people have more than one star for different areas of entertainment. I learned that Gene Autry is the only one who has 5 stars, one for each of the categories represented.

We also stopped and grabbed snacks for the plane at the Laurel Canyon Country Store. I of course being a big fan of music am interested in the musical history of that area. There’s not really anything to do in Laurel Canyon as such. It’s just a residential area and my husband was uninterested in just driving through the canyon, which I understand given all the other driving and all the traffic we sat in. Right at the entrance to the canyon though is a little convenience store/deli that you could apparently run into lots of the famous people who live(d) in Laurel Canyon. We didn’t bump into any 60s rock icons, but at least I can say I did something related to Laurel Canyon. And that was pretty much the end of our little trip.

This is my third time in LA, and I don’t ever feel compelled to come back here. I don’t find it a particularly compelling city to be in. Unless you’re up in the hills and looking at the views, it’s not a particularly pretty city. And if you’re in the hills then there’s all the worry that your house might disappear thanks to earthquakes, wild fires, and mud slides. It’s all sprawl and traffic. I feel like we drove through a lot of areas of the city since everywhere we went Google Maps was like there’s an accident on the 405 or 101 or both so let’s go not on the highway. I wouldn’t care to live in any of them. And the traffic as advertised is terrible. It took us almost an hour to go the 4 miles between our hotel and the Greek Theatre on Thursday night and it wasn’t because of traffic going to the concert. I also am confused as to where people park all these cars they’re driving around all the time because driving by there didn’t ever seem to be any parking for any of the businesses that lined all the streets. Doesn’t matter I guess because I will never need to know. As far as I’m concerned aside from the weather LA doesn’t have much to recommend it. I know some people love it. They can have it. I’ll keep Baltimore.