Friday night I went to my second of three concerts at Merriweather Post Pavilion. This time it was Brandi Carlile with Lucius opening. It is no secret around these parts how much I adore Brandi Carlile. I also really like Lucius and would have gone to see them on their own, so it was a bonus that I got to see both of them together. I do wish that Lucius had gotten to play longer though. They only played for about 40 minutes. With only them and Brandi on the bill and the concert starting at 7, I’m not sure why they weren’t given a full hour. I’m sure the people in front of us were really wishing they had a longer set. They were very obviously there for Lucius. Holly and Jess, the lead singers, always dress in matching outfits that are a little bit ostentatious and out there. The three guys in the band always dress in matching outfits as well, but it’s generally this suits or in this case pretty casual black pants and shirts. Anyway, the people in front of us were dressed in matching white jumpsuits with hot pink wigs. They left after Lucius’s set too, so they obviously were really only there to see them. That was an awful lot of money to spend for 40 minutes since we were all the way down in the pit, but I guess to each their own.

I also was kind of annoyed with people during Lucius’s set because everyone around us aside from the people in front of us were obviously there to see Brandi and didn’t seem to care much about Lucius. There were a lot of people talking and just generally ignoring them. Since Lucius sang a lot of their quieter songs it was kind of hard to pay attention to them over the din of the crowd. Also I wanted to throw away the phone of the girl who was sitting next to them that sort of moved into their space after they left. She spent the whole concert taking photos and videos. I don’t begrudge anyone a few photos or even videoing one song, but when you spend the whole show doing that it’s super annoying to everyone around you. I don’t want to have to watch the whole show through your phone or as in this case have your arm right in my line of vision as you hold your phone up over your head. I was hoping she was going to chill out and put her phone away after a couple of songs, but she didn’t. I am not confrontational and generally would sit there and be annoyed in my head the whole time and then blog about it here later. I was even nice and waited for her to finish her video of “The Story” and then asked her politely to put her phone down because she was blocking my view. She never really did, but at least that made her move back over into her seat and she did keep putting her left arm down and only holding the phone up with her right arm so that her arm wasn’t in my face. I guess that’s something, but all it did was shift the annoyance to in front of someone else.

Brandi’s set was amazing as usual. I saw her 5 times in concert last year and for all but one show she pretty much did the same set aside from a song here or there that she traded in and out. In a lot of the publicity surrounding the by the way I forgive you album she talked about how they are such a performance based band and realized that they were stuck in a rut writing songs based on what they knew were going to be energizing to audience especially on the festival circuit and not anything that felt artistically challenging or interesting. They decided to go in a completely different direction with that album, and obviously it has paid great dividends. I adore it, but I did also miss some of those livelier numbers during their sets last year. It seems like maybe they have started to add some of that stuff back in. It felt to me that they made this set list in kind of chunks.

At the beginning they had a bunch of the energetic crowd pleasers to get people into the show. I felt way disoriented though because they started off the set with “Hold Out Your Hand”, which is the song they used as their encore at all 5 shows I saw last year. It really is such a great encore song that I almost thought it might become one of those songs a band has that they use as their encore forever and always. Apparently not. Instead everything was flipped completely on it’s head with that song being the opener and “Every Time I Hear That Song”, which they had been opening their sets with last year becoming one of the encore songs. They also did a chunk of quieter old favorites like “The Story” and “The Eye”. Then they did a chunk of covers including inviting Lucius back out on stage and singing their song “Dusty Trails” with them. Brandi joined them for that song at the Newport Folk Festival last year, so I guess they decided to do a reprise at this show. 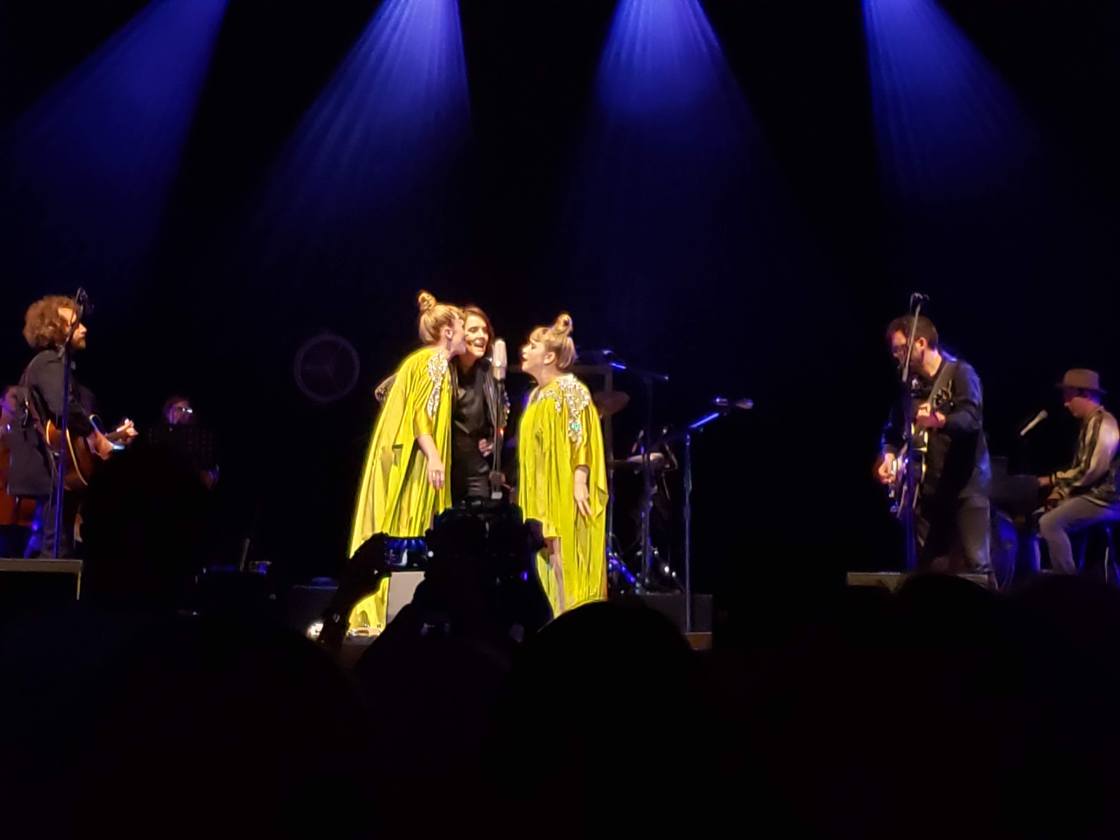 She also sang a cover of Joni Mitchell’s “A Case of You” and Elton John’s “Madman Across the Water”. Then there was a chunk of songs off the new album. She did two encores ending the first one with “Party of One” and then coming back out to sing a cover of Leonard Cohen’s “Hallelujah”. It is a wonderful song, but I am pretty much of the mindset at this point that it needs to be put on ice for at least 25 years. The Jeff Buckley cover of that song was inescapable in television and movies for a number of years and it kind of wore me out on it and ruined it for me. I would be perfectly content to never hear that song again for at least another decade. That being said Brandi does a lovely cover it and it was a beautiful moment to look back behind me at all the people holding up the flashlights on their phones and swaying to the song.

I was also amused the next day to discover that I had made it into another of Pete Souza’s photos at a Brandi Carlile concert. If you don’t know who Pete Souza is, he was Obama’s official photographer. He is friends with Brandi and is as equally obsessed with her shows as I am. He goes to a lot of their shows and photographs them from backstage. I was in the front row of a show at The Beacon in New York City last year and wound up in one of the photos he posted on Instagram. This time you have to zoom way in on the crowd to pick me out, but if you do you can totally find me. I’m going to see her in Philly with Mavis Staples in September. We don’t have great seats for that one, so I know I won’t wind up any photos there.