This past weekend I went up to New York with a couple of my friends in what has unintentionally apparently become our annual March Broadway trip since this is our third year running. I went into the show fairly cold. I had a general idea of what the story was about, but I hadn’t heard any of the music yet. I knew the backstory behind its run in New Jersey several years ago followed by a cult online following of the album recorded for that production that then propelled the show to off-Broadway and now onto Broadway. It just opened on Broadway this week, so it’s been pretty easy to avoid unless I guess you’re a theatre obsessed teenager on Tumblr or wherever the teenage fandom hangs out online these days. Most people I know have never even heard of this show before.

In my mind the show is a cross between the tv show Chuck (guy gets computer implanted in his head that makes him cooler, but then it causes mental problems), the movie Can’t Buy Me Love (teenage dork does something to try and make himself popular, but winds up blowing off his good old friend in the process), and the movie Labyrinth (because the representation of the super computer in the boy’s head reminded me of David Bowie’s character in Labyrinth even though it was supposed to evoke Keanu Reeves’ character in The Matrix). In non-pop culture references the show is about a nerdy teenage boy who wants to be more popular and finds out about some super secret super computers “from Japan” the size of a pill called squips that you can drink and they will implant in your brain and tell you what you should do to “be more chill”. Then of course all the lessons about learning how to like and be liked for yourself that teenage stuff like this likes to teach you.

I waited to read the New York Times review of the show until we were driving home last night because I didn’t want their critic’s view of the show coloring mine. I’m glad I did because his basic assessment of the show was teenagers get off my lawn. I guess he felt like he just couldn’t completely outright pan the show because it already has such a large following and it broke the Lyceum Theatre’s box office record for weekly ticket sales. So instead he basically just said it’s a terrible show by theat-ah standards, but I guess it’s okay for you teenagers. No one over 21 should bother.

Well, I’m 40 and I thoroughly enjoyed the show as did the other three over 40 adults and yes two 13 year-olds I was with. The other adults sitting around me all seemed to really like it too. I heard multiple people around me during intermission talking about how much they were enjoying it. So sorry it wasn’t up to your exacting standards Mr. NYT Critic. Sometimes you just want to go to the theatre to have fun. Is it the best show I’ve ever seen? No, but was I thoroughly entertained for 2 and half hours? Yes, I was. Plus I’ve had the song “Michael in the Bathroom” stuck in my head since the show. Also that song leads to perhaps one of my favorite theatre callbacks ever which I won’t spoil here. That’s pretty much all I’m asking for in Broadway show, and Be More Chill delivers it.

I will agree with him on one thing though. The show is needlessly loud. They definitely can and should take the sound down a notch or two. There’s no need anyone needs to risk hearing damage at a Broadway show. Yes, the music is more rock based, but that doesn’t mean the show needs to be rock concert loud. Concerts themselves are out of control with the sound levels, but at least there they can make the excuse that they have to overpower the ambient noise of the crowd and the bar, which is not an issue in Broadway theaters.

Is this a show I’m going to recommend to my 70 year old mother? Probably not, but if you still have a soft spot for teenage related pop culture like I do then this show is well worth your time. And obviously if you have some teenage theatre lovers in your life then apparently this show was made for them. 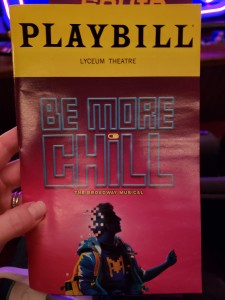