This past week we took what has now become our annual trip to Isle of Palms, SC. This is the third year we’ve gone down there in May. I always have vacation time to use up this time of year, and it’s a good time to take a beach vacation before all the schools let out and the beaches get really busy. Isle of Palms is far enough south that it’s generally been warm enough to go to the beach there even in early May.

We rent a condo at one of the places inside of the Wild Dunes resort. There are a couple of places that have one bedroom condos. There are two sets of condos that I really like because they have screened in porches and if you rent one of the ones on the first level than you can walk right out to the beach from your screened in porch, so I try to find one of those that’s available.

Unlike previous years the weather was pretty much perfect this year. The first year we went there was a freak early tropical storm that brewed up and rained out half our vacation. Last year we had some thunderstorms. This year was great. The first few days were in the high 70s, which was a little chilly for sitting out on the beach, especially since Isle of Palms gets some really strong winds out on the beach. But later in the week it was in the 80s and 90s and it was perfect beach weather.

Everyone keeps asking me what we did on our trip and my answer is I went to the beach. Unless you want to count going out to dinner or the one night we went to see Guardians of the Galaxy as doing something. Other than that spent all my time at the beach. I got up and walked the beach every morning, then sat out there and read or just stared at the water until it was time for lunch. After lunch I went back out for a few more hours until I came back in to get ready to go to dinner. 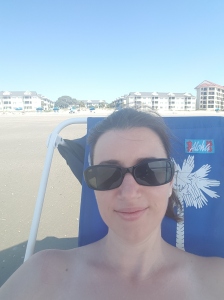 The water was really calm while we were there this year, which I think made a big difference in the wildlife I saw. In past years I’ve found lots of sand dollars and other big shells. I found two sand dollars the first day, but nothing after that. There were a lot more people at the beach than there were in the other two years we were there for some reason so it might also be that other people were snatching them up before I found them. It also meant I saw a lot more of various types of sea birds diving for fish because they could easily spot them in the calm waters. I also saw some dolphins one day too.

As I mentioned, as a barrier island, it gets really windy on Isle of Palms. After trying to use a cheap beach umbrella I bought at the grocery store for the past two years and giving up pretty much every day because it was too windy for the umbrella to handle I decided I was going to go properly prepared this year. There’s a rental company on Isle of Palms that rents beach chairs and umbrellas. I noticed that the umbrellas they rented had no problems standing up to the wind, so I wanted to find a professional grade beach umbrella for myself. I found it slightly painful to shell out $200 for a beach umbrella I’ll only use once a year, but I figured if I was renting one I would spending that much in two years anyway. I’m very happy I spent the money because it worked out perfectly. No more umbrella blowing away or breaking on me in the wind this year. After looking I’m pretty sure that the umbrella I bought is actually the same as the umbrellas they rent aside from the color and branding. 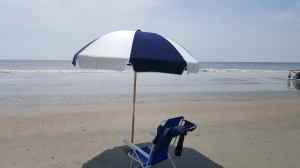 As usual we had some delicious food while we were there. We went back to our two favorite places: Acme Low Country Kitchen, which is the only place on Isle of Palms itself that we’ve found worth eating at, and Crave which is just over the bridge in Mt. Pleasant. We also tried a new to us place called Graze that I really liked though it’s on the far side of Mt. Pleasant so a bit of a trek to get to. We also went into Charleston for a fancy dinner at the Charleston Grille one night. The final night we tried another new to us place called Opal, which I was not a big fan of.

As usual it was a wonderful, relaxing week at the beach. I wish I could go more often. Both the place we stayed in last year and the place we stayed in this year appear to be on the market, so if anyone has an extra $400,000 lying around they want to give me I’ll take it. Since I don’t think that’s going to happen I’ll just look forward to going back and renting a place again next year.