Last Sunday I went to the Smithsonian National Museum of African-American History and Culture, which opened last year. Like the other Smithsonian museums admission is free, but at this point you still need to have a timed admission ticket to get into this museum. They generally release blocks of tickets about three months ahead of time and you have to be on top of it to get them because they go fast. My husband managed to snag four tickets back in January for this past Sunday. 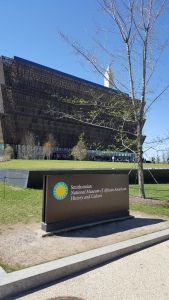 We met up with some of our friends who live in DC. Our tickets were for entry at 11:45. We were in the museum for almost 6 hours until they kicked us out at their 5:30 closing time and I still didn’t feel like I saw everything. I didn’t stop and watch any of the many films throughout the museum, and the further we went along the less I read because I realized I was running out of time.

I’m not sure what time the museum actually opens, but at least when we got there we were able to head straight into the exhibits without waiting in any lines. When we got back up though there was quite a line of people waiting to get in. The history part of the museum is three floors of exhibits underground. You have to queue up to ride an elevator down to the start. They recommend you to use the bathroom as you exit the elevator and they aren’t kidding. It’s the last time you’re going to see a bathroom for awhile unless you backtrack a lot or rush through the exhibit.

The exhibit starts in the 1500s with the beginning of the slave trade and ends around 2008. It covers all the things you would expect from slavery, the Civil War, Jim Crow laws, Civil Rights, and more recent issues of race.

After we spent a few hours winding our way through the history exhibits we stopped at the cafe for a late lunch. Like some of the other newer cultural Smithsonian museums the cafe is an extension of the exhibits with the food representing traditional foods from African-American culture. It’s pricy but it was delicious.

After lunch we headed to the exhibits on the upper levels of the museum. The upper levels are more of the cultural parts of the museum with the African-American experience and influence on American cultural institutions. There are exhibits related to sports, the military, television, theatre, film, food, fashion, music, and art. I definitely ran out of time to give all of these their proper due.

There are also some really nice views of the National Mall from the museum. 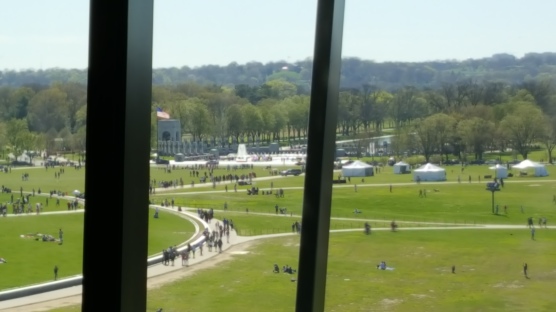 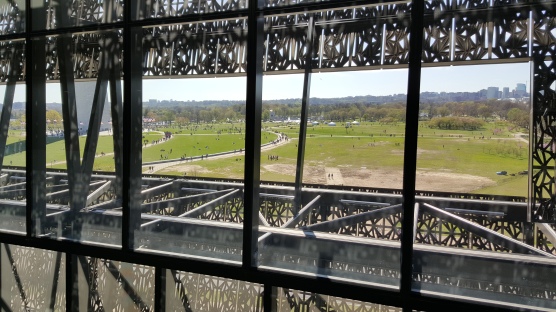 It is a really well done museum, and if you get the opportunity I highly recommend checking it out. I definitely want to go back again at some point in the future and spend more time in the areas I gave short shrift to on this visit.