Remember how I keep saying I already have too many podcasts to listen to and I can’t keep up, but that I couldn’t resist listening to another one? Well you can add one more podcast to that list because I am now in love with Baltimore: The Rise of Charm City, which just started its second season. It airs locally on public radio station WEAA every other Friday, but then like many radio shows these days is available in podcast form which is how I’m listening to it. It’s part of a documentary radio series called Finding America produced by AIR and funded in part by the Corporation of Public Broadcasting (insert something here about why funding for public media is important).

Host Stacia Brown provides an oral history of Baltimore institutions and places via interviews with people involved with them. It provides a look at some of the things that make Baltimore truly great and the history behind them, but she does not sugarcoat anything. The problems of the city both historically and at present are incorporated into the stories. She’s done stories on things like Shake & Bake Family Fun Center, the Great Blacks in Wax Museum, Druid Hill Park, and my own neighborhood Hampden, which is obviously a favorite episode of mine. Episodes are under 30 minutes and there’s only 14 of the at this point, so you can very easily catch up. I highly recommend doing so. I somehow missed that this existed until 2 weeks ago when someone who is not even from Baltimore recommended it on Twitter, so don’t think you need to be from Baltimore to enjoy this. Obviously Baltimoreans will have a different appreciation for it, but anyone who is interested in cities and people should enjoy it. Go give it a listen.

I’m not sure I’m totally on board Disney’s plan to remake seemingly all of their animated features as live action movies, but I admit I was extremely excited about the prospect of Beauty and the Beast. It’s my favorite Disney movie, and I got chills starting from the first teaser trailer that completely emulated the one for the animated film.

As the opening day for the movie neared though I grew a little apprehensive about it especially as the reviews for it seemed to be middling. I thought what if it is just an inferior shot for shot remake and I should have just stayed home and rewatched the animated version instead. And when I thought I might be left to see it on my own I started to reconsider if I should, but then I found out a group of my friends was going so I decided I should put aside my worries and go see it.

I’m glad I did because I loved the movie. It doesn’t supplant the animated movie, but this is an excellent companion piece. The casting is brilliant. Everyone is perfect for their parts. The shot for shot moments of the film, which is a good chunk of it, only added to its greatness for me instead of making it seem like a sad copycat film. The movie is much longer than the original, so there are a number of things that are not in the original film. They fill out the back stories of Belle and her father more as well as add a little bit more to the Beast’s story.

They also filled out the movie with four new original songs. No one is going to be clamoring to hear any of the new songs again. I felt the same way about the songs they wrote for the Broadway show. I’m kind of curious why they didn’t just use those, but either way none of those songs add anything to either production. The original music from the animated movie is some of the best Disney music there is, so hearing all of that again made me really happy. I really did not anticipate having the physical reaction to the opening strains of the song “Beauty and the Beast” when they start coming down the stairs to the ballroom dance scene, but my heart swelled.

Most importantly they fixed the major problem with the original movie in which Belle treats the local bookstore like a library. They clearly say it’s a book store and yet she seems to borrow and return the books that she reads from there. Given no one else the town seems to care about reading I’m not sure how that store is still open. In the live action movie they make it a library, which makes so much more sense. I’m glad to see someone at Disney was as bothered about this as I was.

Seeing this movie with an audience was great too. Everyone seemed to love it. I was amused that the people in my audience clapped for the Le Fou gay scene that has caused so much brouhaha over nothing. Seriously it’s like 1/2 a second long. If you blinked at the wrong time you would miss it. I’ve also never been in a movie theater where people applauded at the credits as if they were at the live theatre. I’ve obviously seen movies where people clap at the end in general. People did that here, but then the credit sequence was one of those where each individual character is shown on the screen with the character and actor name. People the theater applauded each actor cheering louder for the ones they really liked and booing Gaston. It was a perfect way to end a wonderful reimagining of a beloved Disney movie.

There are approximately 1000 shows currently on Broadway or set to open soon. There is sadly no way I’ll get to see them all, but I decided to take a trip to New York to mark at least a couple off my list. I get way more vacation time than my husband, so I decided I’d take a few days off work and take a mid-week solo trip up to see a Tuesday night show and Wednesday matinee. Hotel rooms in NYC mid-week at the end of February are fairly reasonable, and it turns out we had enough points on our credit card to pay for my hotel that way anyway.

Thanks to the credit card points I actually wound up staying at the Doubletree Suites in Times Square because it was the best deal with the best location for what I was doing. I really didn’t need a suite to myself especially just for one night, but I pretended I was all fancy for a night. The hotel was a perfect location and I was surprised at how quiet it was at least where my room was located. No usual traffic noises keeping me awake. The hotel itself could use a little updating. It was looking a little tired, but the bed was comfortable enough so I don’t have any real complaints.

I took the train up on Tuesday afternoon. Happily it worked out that for reasons both my friends in NYC were not at work during my trip so I got to steal them away to meet up. Tuesday night I met up with one at the bar in an Italian restaurant for called Casa Nonna for an early happy hour dinner. It was great to catch up with her in person and enjoy some delicious pizza.

After that I headed to the newly renovated and reopened Hudson Theatre for Sunday in the Park with George starring Jake Gyllenhaal and Annaleigh Ashford. Sunday in the Park with George is one of those classic Sondheim musicals that I had never seen, but always felt like I should so I was super happy when this production came around and it started getting such good buzz. I immediately put it at the top of my list of shows to see given its limited run. It was great. Turns out Jake Gyllenhaal can sing. Who knew? He made an excellent Georges Seurat. Despite her Broadway bona fides this is the first show I’ve seen Annaleigh Ashford in as well, so I’m glad I finally got to see her perform too. The theatre itself was beautifully restored, though I suspect they’re soon going to regret their decision to serve wine in actual wine glasses instead of the normal Broadway sippy cups given the cream colored velvet seat covers. 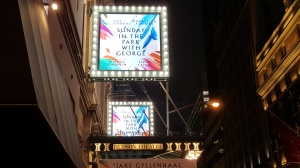 Wednesday morning I of course got myself a bagel for breakfast and then took a walk on the High Line. I’d walked part of it in the past but not the whole thing. I figured it would be a good way to get my steps in for the day. Scenes from the High Line:

In the afternoon I met up with another friend for lunch and then we went to see Natasha, Pierre, and the Great Comet of 1812 together. The reviews for this show had been really great and my boss who also sees a lot of Broadway shows but doesn’t care that much for musicals told me she loved it, so that’s why it was also one of my top choices of shows to see. I’m definitely glad I saw it on Broadway because there is no way it’s going to translate into a touring production even remotely close to what it is now. The staging is set up in such a way that the actors are everywhere in the audience a lot of the time with staircases from the stage leading up into the Mezzanine. There’s no way they’ll be able to do that on a tour. There’s lots of seating on the stage as well, which will also be something can only be approximated to a degree.

The show itself is based on War and Peace, which is something I’ve never read so I have no idea how faithful the storyline was. Condensing a book that long into a Broadway show I’m sure results in a lot of cuts. I certainly felt the story lacking in certain places. Entire plot threads seem to show up in a song and then just completely disappear. The overarching love story was the heart of the show and made sense to me, but most everything else including Pierre and the Great Comet left me slightly confused. It’s a sung through musical, which I’m not sure I realized going in. It made me wish I had listened to the cast recording ahead of time as I know I always miss things when they’re solely in song form on first go around. At any rate none of that really mattered because it’s just such a fun production full of delightful dancing and costumes and hey did you know that guy Josh Groban can really sing? There were a lot of fun audience interaction touches too. At one point the second act they pass around Great Comet branded rhythm eggs for people to shake along to the song. Now I have a little souvenir from the show I can annoy everyone with. If you’re thinking about seeing a Broadway show I would definitely recommend this one because it is a really good time and you’re never going to get the same experience from a touring production.

It was an excellent trip. I’m really glad I decided to plan it for myself. Everything worked out perfectly. I should probably do it again some time.