This past weekend I went up to the Hudson River Valley to visit one of my friends from college. She moved up there about a year ago to teach at West Point. It’s not as nice as the couple years she was living near me in Maryland while in grad school, but definitely better than when she was in Georgia or Washington State. I can at least make it to New York for a weekend visit fairly easily.

I took a half day off work on Friday and drove up there arriving around 5. After I got up there we drove over to West Point and Kristen gave me a quick tour of the campus. It’s incredibly beautiful, and she confirmed that the views from her office are amazing. I’m still trying to wrap my head a little around the fact that the Hudson River Valley is so close to New York City. It seems like it’s in another world.

We had dinner at a Mexican restaurant in one of the towns around there. I’m not sure exactly where we were at that point. We ended the night watching commercials with a little bit of Olympic opening ceremonies mixed in. Seriously NBC that was complete garbage.

Saturday we headed to Olana, which is the house built by Frederick Church. If you’re not familiar with him, he was the most famous of the painters from the Hudson River Valley School. Based on what our tour guide told us he seemed like quite the interesting man. The fact that he made enough money as an artist to build this incredible house sort of speaks for itself. The house has lots of Persian influences, but he really pulled design elements from all over. The house is built on the top of this hill overlooking the Hudson River. It’s an incredible view. The house itself is gorgeous too. If you’re ever in the area I would highly recommend checking it out. 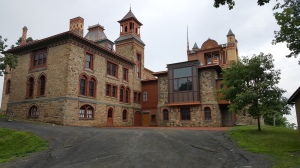 We drove into Hudson for lunch and wound up at a French place called La Perche for lunch. Everything on the menu sounded amazing and I went back and forth trying to decide what I wanted, but we eventually both wound up with the burger. Sadly it did not leave room for one of the yummy looking pastries for dessert.

Our next stop was Hyde Park and Franklin Delano Roosevelt’s Presidential Library and Museum. The grounds hold both the house he lived in for pretty much his whole life as well as the library and museum. We knew that based on the time we were arriving we were most likely only going to be able to do one or the other. Luckily we didn’t actually have to decide because all the house tours were sold out for the rest of the day. I think the museum would have been my first choice anyway, so I wasn’t really disappointed. We got to walk around the grounds and see the outside of the house and his gravesite anyway. I don’t think I learned that much more than I already knew about FDR, but I enjoyed the museum nonetheless. I didn’t like it quite as much as LBJ’s, which is the only other presidential library I’ve been too. I’m still very glad we went though.

On our way into Hyde Park we drove past a Dairy Queen. I love me some Dairy Queen, but there really aren’t any around Baltimore. The only ones around here are inside mall food courts and they’re not exactly convenient to where I live, so I pretty much never eat it. We both commented on it on the way in, so decided it was mandatory to stop and get some ice cream on the way out. Of course eating ice cream at 5:30 didn’t make us very hungry for dinner. Kristen wound up cooking us some fish, risotto, and green beans that we ate close to 9 in the middle of watching some more Olympics.

Sunday morning we had breakfast at a place called Fiddlestix. I somehow refrained from ordering the Heath Bar waffles or the Oreo french toast. I still kind of regret it, though not as much as I probably would have regretted it if I had actually eaten them. I wound up with fruit salad and regular french toast.

Kristen suggested several options for activities for the morning before I headed back to Baltimore. I decided against the official West Point tour. Although I would like to do it at some point, much of the tour is actually on a bus. I’m glad I looked up info about it and found that out because it is actually what made me decide against it. Since I was going to be spending most of the rest of the day in the car I wanted to do something a little more active. I also decided against going to Washington Irving’s house, which is also something I’d be interested in the future, because it had time entry. I didn’t feel like being beholden to a schedule. So my final decision was to go walk around in Bear Mountain State Park. Part of the Appalachian Trail runs through the park, though we didn’t really walk any of it. There’s a little zoo of injured animals that they rehabilitate. We walked around that and then down a little trail down to the river. It was a nice little park, and I’m happy I got in some exercise before getting back in the car. I headed straight from the park back to Baltimore.

It was a great weekend. It was wonderful to catch up with Kristen and see where she’s living and working now. I also enjoyed exploring around the Hudson River Valley area. It’s somewhere I’ve never been before. It’s incredibly beautiful and extremely different than the city life I live. I’m not sure it’s somewhere I’d want to live myself, but I very much enjoyed visiting there.