If you have been a long time reader of this blog than you may recall that I have had a long time desire to see The Cure live. Last night I finally got to fulfill the dream I’ve had since way back when I first became aware of them way back when the song “Love Song” entered my life back in 1989. It’s a little disingenuous to say that I’ve wanted to see them in concert that long. I was only 11 then and if I was thinking about going to concerts back then, I probably would not have wanted to go to a Cure concert. In fact I probably would have been terrified to go to a Cure concert until I was much, much older. I’m not sure what I thought would happen at a Cure concert, but my goody-two-shoes, straight-laced self would have been scared to even think about what might happen in a place with that many goths. I was always attracted to characters that had that sort of sensibility, so I like to think I have sort of an inner goth. However, that was never going to be on the outside. First, being a goth takes way too much work. Second, see above about my actual personality, and even though I was attracted to characters like that real life goths would have freaked me out. So realistically it was much, much later in my life that I really wanted to see The Cure in concert, but I’ve loved their music for a long, long time.

Alas by the time I really would have been old enough to see them live and had the money to do so, they weren’t so much with the touring in North America. They’ve had done a few one off dates here and there, but there haven’t been any big tours here in quite some time. They finally announced that they were going to do a tour in which they were going to play their first three albums in their entirety. That wouldn’t have been my first choice in what I wanted to hear, but I would have gone just to see them and eagerly awaited the announcement of those concert dates. The supposed time frame for that tour came and went and there were never any dates announced, but just when I started to give up hope a tour was ever going to happen they finally did announce this tour which was not confined to those albums and all was right with the world.

I knew going in that The Cure was never going to be a band that put on the kind of show that I love most where there is lots of audience interaction and other fun stuff that really make you feel like you’re experiencing something special. I knew they were going to be a band that got up on the stage and played their music and that’s what you were going to get, and it was. The little that Robert Smith interacted with the audience was completely lost on me anyway because I couldn’t understand 90% of what he said. I don’t know why because I had no problem understanding the lyrics when he was singing. When he was just speaking though it sounded like his words were going through a garbage disposal and I couldn’t figure out what he was saying. It’s actually not the first time I’ve had that experience at Merriweather, so I’m not sure if it was him, something with the way their sound system is set up, or a combination. At any rate I’m almost glad he didn’t interact with the audience more because I would have felt like I was missing out on something.

All that being said I had a marvelous time and am super, super glad I got to go. It lived up to every expectation I had for seeing them live. They played almost every song I would have wanted to hear save for “Friday I’m in Love”. I’m a little bummed about that, but hey I got every single other one, so I can’t complain too much for only missing one song from a band that has an extensive catalog of music to pull from. I sort of assumed that they were just playing the same set every night on the tour, but not so. I was curious if the sound restrictions at Merriweather that require a hard stop by 11 pm made us miss out “Friday I’m in Love” because they ran out of time, but I looked at their set lists from shows the previous week and they were different to some degree every night and only one of them included that song, so I guess it really just wasn’t in their plan for last night. Comparatively I’m really happy with the set we got, so I definitely won’t complain about that song.

They played for almost a full 3 hours, which was great. I love so much the rare occasions where I actually get to see a band play what I consider a full set. Three hours goes well beyond that, but these days with how if it’s not a festival they still try and pack at least 3 or 4 bands onto a bill meaning you get at best 90 minutes from the headliner. The Dixie Chicks played 2 hours on Saturday, and I thought that was great. So it was wonderful to get to hear them play for such a long time and really explore their catalog. My only complaint about that was that they literally started taking encores halfway through the show. They took their first encore 90 minutes into the set. There were a total of four. I’m already a curmudgeon about encores. I think they’re ridiculous and think people should just play what’s on their set list and dispense with this nonsense of going offstage, making the audience cheer for them, and them coming back for a few songs. The fact that we had to do this four times for The Cure was beyond stupid. Just stay on the stage and play 10 more songs and then if you must have one encore.

I generally don’t care that much about the lighting and whatever production design is going on at concerts. I’m there for the music and the show that the band is putting on. The background stuff is all incidental to me, but I actually did really appreciate the lights last night. Unlike the production at the Dixie Chicks concert I saw last weekend which seemed overdone and actually at times distracted from them, the lights at the The Cure did a perfect job of accenting the music. I guess they’ve had a long time to perfect that kind of thing. 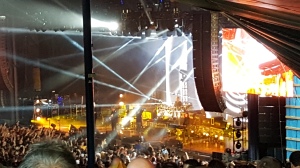 I wasn’t sure what to expect of the crowd. It was actually way less full of goths than I anticipated. I guess because many people have outgrown that. There were of course a lot of people my age and older, but some younger people as well. I guess they’re not so much into the goth thing these days. There were definitely some, but they were a minority of the audience for sure. I did see one guy with a tattoo of Robert Smith on his leg, which seemed a little crazy. He didn’t even stay for the whole concert, so that seemed a bit incongruous to me. I also really wanted to take the phone away from the guy in front of me and toss it in the garbage. He recorded a good chunk of the concert which was really annoying. I didn’t pay a lot of money to come watch a show through your cell phone screen. Rude! 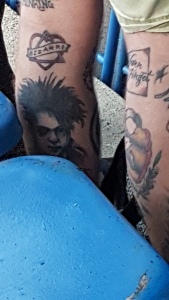 It was a really wonderful night, and something I’m glad I finally got to experience. That being said I’m not sure I feel compelled to ever see The Cure in concert again now that I’ve seen them, but I also don’t feel like I’ve spent the last couple decades of my life dreaming of something that didn’t live up to my expectations because it totally did.

One thought on “The Cure at Merriweather Post Pavilion”