You may recall my post from last fall on the first concert in the BSOPulse series with Dawes. There were four of these concerts over the course of the season. I didn’t go to the ones with Wye Oak or Dr. Dog, but I happily made it to the final one of the season with The Lone Bellow. They are currently one of my favorite bands to see live as is evidenced by the numerous times I’ve seen them. I definitely couldn’t miss out on this opportunity to see them play with the Baltimore Symphony Orchestra.

There are three parts to every BSOPulse concert. In the first the symphony plays some short 20-30 minute piece that they feel pairs well with the music of the band playing that night. This time it was Aaron Copeland’s Appalachian Spring, which I agree is an apt choice to pair with The Lone Bellow. It’s also a piece I enjoy, so I was happy to hear the BSO play it.

In the second part the band, in this case obviously The Lone Bellow, plays a set by themselves. The last time I went during the set change between the symphony and the band Alex Cortright from WTMD had a conversation with the BSO conductor and the band about the intersection of the music. I guess maybe things went quicker than anticipated this time or something because he just said we’re going to skip the conversation tonight because I know what you’re here to see. This part seemed slightly disorganized this time. I don’t know whose fault that was. It wasn’t a big deal, but something seemed weird. I did appreciate the conversation last time, so I was a little sad that they didn’t do. It on the other hand it meant more time for The Lone Bellow to actually play, so I wasn’t that sad.

As usual The Lone Bellow was fantastic. It was for the most part very typical of one of their sets. Great music, a lot of energy, and beautiful harmonies. They played a good mix of songs from their two albums. Zach is always a little nuts, but he seemed extra crazy at the show on Thursday. I’ve also been at multiple shows where one of Brian’s stories resulted in them playing some random song. That happened again at this show. They played an acoustic cover of Prince’s “Purple Rain” and Brian told a story about meeting Prince while intimating that he liked Prince a lot more than Michael Jackson. That somehow resulted in the Michael Jackson song from Free Willy being brought up. They of course then wound up playing that and getting the audience to sing along. I certainly never expected to be having a sing-along to that song ever. Apparently a couple in the first row also got engaged during it, so that will be a fun story they have to tell.

During the third act of the show the band plays three of their songs with the BSO backing them. They played “Tree to Grow” and “Then Came the Morning”. For some reason I can’t remember what the third song was. They all worked very well together and it was a great treat to get to hear the songs played that way.

As always I left a Lone Bellow show wanting to see them again. They’re opening for Lake Street Dive, who I also really like, at Wolf Trap, which is my favorite venue, so I’m hoping I can somehow make that one happen too. They’ll soon be announcing the bands for the second season of BSOPulse and I’m very excited to see what bands they’ll have next year. 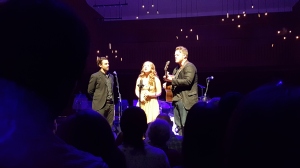 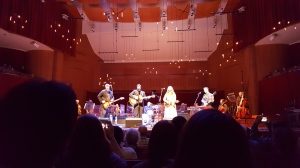