We headed up to NYC for the Easter weekend to visit Paul’s sister and her family. Unfortunately my brother-in-law was sick the whole weekend, so we didn’t get to see much of him as he was quarantined in the bedroom. I didn’t see him at all on Saturday and only saw him long enough on Sunday to say a quick hello and goodbye. So that was too bad. Saturday during the day we just hung out and played with our niece and nephew, grabbed some pizza for lunch, and then dyed some Easter eggs.

Saturday night Paul and I met up with one of my Twitter friends for dinner. When Twitter was doing their little 10th anniversary hashtag #LoveTwitter the other week I said I love Twitter because it’s allowed me to meet so many awesome people that I would not have otherwise. As far as social media goes it’s the only one that’s really allowed me to connect with people I don’t already know. Facebook I’ve always kept locked down to only my real life friends (though sometimes Twitter friends eventually get to move into that category because they do become real life friends). Maybe if I used Facebook differently it would change things, but I don’t. Instagram I don’t have locked down, but I don’t follow that many people there and it seems way less social to me than either Facebook or Twitter. Maybe I’m just old and don’t get it but I don’t get how you really have much interaction there. And I am old so I haven’t even ventured into Snapchat. So Twitter is the one piece of social media I use that has actually led me to meet new people. Between Twitter recommendations and following other people followed by people I follow I’ve met a lot of great people online and then when the chance has presented itself have gotten to meet up with some of them in real life. A lot of it’s been a hey we’re going to be in the same place at the same time we should meet up kind of thing, but I’ve also made friends who we now purposefully travel to get together. Twitter certainly has its issues, but I do appreciate how it’s connected me to other people.

Anyway on Saturday I finally got to meet up with someone I’ve known over Twitter for a few years. We’ve talked about trying to meet up a few other times I’ve been in NYC, but our schedules never meshed. This time it actually worked out. We had dinner at a Cuban restaurant before Paul and I went to see a Broadway show. It was really great to get to finally meet her in real life and hopefully we’ll be able to meet up again in the future.

After dinner Paul and I went to see Bright Star, which is the new Broadway musical by Steve Martin and Edie Brickell. Yes that Steve Martin and that Edie Brickell. If you’ve paid any attention to either of them in the past few years you know that they’ve written two bluegrass albums together and apparently somewhere in the midst of that decided to write a Broadway show as well. The music in the show is also bluegrass, so I’ll be curious to see how that goes over. I’m already in the tank for bluegrass music, so I loved it but I’m not sure how Broadway audiences in general will go for it. Luckily the show got a very positive review in the New York Times, so hopefully that will help.

The story takes place in the 1920s and 1940s North Carolina moving back and forth in time to tell the story of Alice Murphy’s life. She’s played by Carmen Cusack, who was amazing and who I could listen to sing all day long. Without saying too much her character experiences a tragedy in the 1920s that influences what her life has become in the 1940s. It’s a very old-fashioned musical. There’s not a lot of spectacle and of course the bluegrass music makes it seem very rootsy, but I loved it. The friend we met for dinner had actually seen it a few nights prior and suggested she wasn’t sure if she was watching a Lifetime movie or a Shakespearean story. I came down the side of a Lifetime movie, but after thinking about it a little changed it up slightly in my mind. Instead of a Lifetime movie, which I tend to think of as more over-the-top melodramatic, I settled on more like those old Hallmark Hall of Fame movies/mini-series that used to air. I think this story would fit right into one of those. I feel like the way I’m talking about it is selling the show short because it is very beautiful and I loved it and that’s why I worry it won’t connect with Broadway audiences at large because I hope it does. So you know if you’re looking for a non-typical Broadway musical and can’t get tickets to Hamilton check out it’s bluegrass cousin Bright Star.

The twins were already up and eating their Easter candy by the time we rolled out of bed, so we missed the egg hunt aside from the few random ones they had missed finding. We spent Easter morning watching Star Wars: Revenge of the Sith, as I’m sure you all did. In a true “I’m living in the future moment”, my 5 year old niece said “Siri play Revenge of the Sith”. It cracked me up, and we did wind up watching it. My niece loves Star Wars probably even more than my nephew, which makes me really happy about Rey in the new Star Wars movies. She hasn’t seen The Force Awakens yet, but when I saw it I thought of her and was really glad she’ll get to grow up with a strong, female Star Wars character.

We ate Easter brunch at a little Belgian place. I had some delicious French toast. After brunch we walked over to Central Park and did a little playground hopping with the kids so they could burn off some energy. It was a beautiful day so it was nice that we could spend a few hours outside. After that it was pretty much time for us to catch our train home. 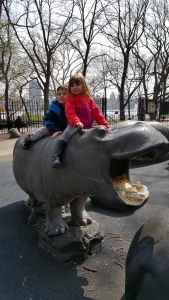