Today is my 6th wedding anniversary, which also means that my husband and I have been together for 10 years. We got married just shy of having been together for 4 years. I don’t actually remember the exact date of our first date, but it was somewhere around October 23 or 24. We got married on October 18, so it’s essentially all in the same little time span for me to go ahead and count all the years we’ve been together when our wedding anniversary rolls around every year.

We met in May of 2004. I had recently gotten out of a serious relationship that did not end well and realized that essentially all my friends in Baltimore at the time were also friends with my ex and were people he was still working with while I was not. That meant I was in the market for trying to meet some new people. I wound up finding this group online called Meetin Baltimore where people planned various activities to do and other people could join in. I’m not sure if it still exists, but it was really great for me. It’s a good thing I joined because I met some of my best friends in Baltimore and my husband through that group.

I remember meeting Paul at the first event I went to which involved going to the farmers’ market and brunch. I then continued to see him at a lot of other events over the next several months. I thought he was nice, but kind of a weird guy. (He’s still a weird guy. I just think he’s made me weirder and maybe I’ve made him a little more normal.) I certainly didn’t think I would wind up dating him or marrying him. Eventually we wound up hanging out on our own sometimes, but still just as friends.

At the beginning of October of that year a few weeks before actually started dating I had to go to a wedding in New Orleans. I had never been before and wanted to play tourist for a few days ahead of time, but didn’t want to go alone. I convinced Paul, and our friends Kevin and Tracie who themselves had just started dating (and who just celebrated their own wedding anniversary a few days ago) to come with me. I’m not sure I would say that trip was any kind of turning point, but I’m sure spending that much time together helped move things along. A few weeks later we were at trivia night with a bunch of people, which was something we did on a regular basis back then, and I was sitting next to him thinking you know I really like spending time with this guy. I think I like him. I should tell him and see where it goes. So I did and I guess the rest is history.

I was amused watching the new show A to Z the other week though because there was a story line where the guy even though he has started dating this girl he really likes winds up going out on a date he already had scheduled prior to them starting to date. I was like who would do that, entirely joking because both Paul and I already had dates scheduled with other people when we first started going out and both went out on those dates and then never called those people ever again.

It’s hard to believe it’s already been an entire decade since we started dating, but I guess as they say time flies when you’re having fun. It’s been a great first decade together. I couldn’t ask to be married to a better guy. I look forward to the many more decades we’ll be spending together. 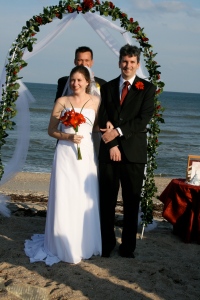