Yesterday I helped host a bridal shower for my friend Darra who is getting married next month. She is a francophile and loves wine so we decided to have a French themed shower and have the activity be a wine tasting. Most of the food was French aside from the cake. We had bread, cheese, and crackers as appetizers. Lunch was a Julia Child simple French salad recipe, potatoes Anna, a caramelized onion tart, a quiche Lorraine, green beans Provencale, and petit fours. 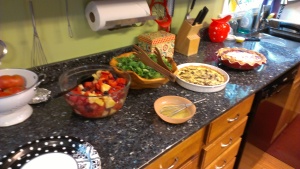 In addition to all the French food I decided I was going to make a Smith Island Cake. For anyone not from Maryland, it’s the official Maryland State dessert and essentially is a cake with a bunch of layers usually in the 10-12 layer range. The original recipe is a dense yellow cake with a fudgy chocolate frosting. I have seen them made in any number of flavors though. Back 6 or 7 years ago when the Maryland legislature was stupidly spending time debating whether this cake should be our state dessert I decided I was going to host a dinner party and make a Smith Island cake for it. After making it and seeing how much time it took I vowed to never make one again. Darra was always bugging me to make another one, and at one point when she was looking for a house she was never going to buy I told her I would make her a cake when she bought a house knowing I would never have to fulfill that promise. I decided that her getting married was equally if not more momentous than buying a house though and deserved the time and effort of me making the cake.

And I am once again reminded why I never want to bake this cake again. It probably took me about 4 hours from start to finish given baking all the little layers and the frosting that takes awhile to cook up.

After lunch we had a blind wine tasting. I picked out 3 bottles each of a pinot grigio/gris and a cabernet sauvignon: one from Maryland, one from California, and one from France. Interestingly in the blind tasting almost everyone wound up liking the two Maryland wines better than any of the other ones. We were all kind of shocked and decided we needed to stop putting down Maryland wines.

Then of course it was time for presents. Darra didn’t put a whole lot on her wedding registry, which I understand. When you get married later in life you already have all the stuff that usually gets put on registries and at that point you both usually have a set so you actually need to get rid of stuff not get more of it. She also already had a shower in Pittsburgh where she is from, so everything was pretty much already gone by the time this shower rolled around. I don’t mind giving money or gift cards at the actual wedding, but I think it’s better for a shower to have an actual gift. I was trying to come up with a good gift idea for something that wasn’t on her registry. One of the things that I loved that someone gave me when I got married that I wasn’t registered for is a vase that has an engraving of our wedding invitation on it. I was trying to figure this gift out far too late to get something like that done, but it got me started googling for wedding invitation keepsakes and I found this idea for making a Christmas ornament out of the invitation. I am not a very crafty person, but this looked like something even I could pull off. Then of course I had to decide what to do with the other 5 ornaments in the box. Anything I wrote on is not very professional looking, but I think they turned out well. I have one more to actually give to her after the wedding. I saved one of the ornaments to put some dried flower petals from the wedding bouquets in, which is another idea I saw online. It works that I was planning on saving back an ornament do that anyway, since I did manage to break one while putting these together. I’ll just get a replacement to use after the wedding so she can have a complete set of 6 until she breaks one.

I’m pretty pleased with how they came out, and I think she really liked them. It was a fun day, and I’m looking forward to the wedding in a few more weeks.