The newly remodeled and expanded historic Senator Theatre in Baltimore has been showing old movies on their big screen on Wednesday nights. Last night’s movie was Labyrinth. It’s one of my favorite childhood movies, so despite the fact that I own a copy of it I wanted to go see it in an actual movie theatre. I apparently was not the only one because that theatre holds 900 people and it was at least 80% full. I was kind of surprised by the number of people there, but I guess I shouldn’t have been. I love the movie, so it should be no surprise that others do too and also wanted to see it.

The big screen definitely reveals the primitive special effects compared to today’s, but it was still fun to watch. There was of course much giggling every time we got a nice shot of David Bowie’s, um let’s say amply showcased package. I’m going to have “Magic Dance” stuck in my head for days. 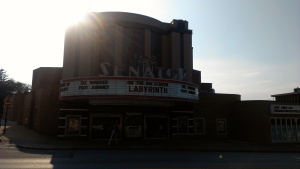 Prior to the movie Paul and I finally had dinner at Shoo-fly Diner for real. We had yet to eat at the restaurant, though they catered the grand reopening of the Senator which we were at. I had heard middling things about it after it first opened, but I felt like recently I had finally heard some more positive reviews. I was hoping they were going to turn it around since Spike Gjerde’s other restaurants are so delicious. I’d say our first experience was a pretty positive one.

It was a lovely evening so we got to sit outside on the patio. I had the fried chicken, which was tasty. It was a half chicken plus a piece of cornbread. I ordered a salad on the side. I wish that they instead had served a quarter chicken plus a vegetable and starch side as opposed to an entire half chicken, which I can’t eat. I’m sure some people prefer that much meat though. Paul had an eggplant dish which he said he enjoyed. I’ve heard people say good things about brunch, so we’ll have to try that next. I’m happy that it seems they’ve gotten some of their early kinks ironed out.