I recently got back from a trip to San Diego, well technically La Jolla, with my family. Now that they’ve all abandoned the east coast for Arizona, it is a 5 and half hour drive for them, so they have been taking their beach vacations there the last few years. On the other hand I have been flying out to see them in June in Arizona the past few years, which is just an awful time to be there. This year we put on our smarty caps and decided I should meet them in San Diego instead.

We had a nice big house within walking distance to the beach. Everyone got their own bedroom and bathroom including my 2 year old niece if you count a walk-in closet with a crib put in it as a bedroom.

Sunday we left the 2 year old with a babysitter and went to a Padres v. Dodgers game. It was kind of like what happens when the Red Sox or Yankees are in Baltimore and it feels like they are the home team instead of the Orioles. There were way more Dodger fans there than Padres fans.

We of course spent time at the beach several days. My eldest niece was really excited to play in the sand. She spent hours digging holes and offering us all “smoothies”. The younger one just liked to smash whatever I was trying to build. Sadly there were strong rip tides the whole time we were there so we really didn’t get to spend much time in the water. I took a walk on the beach most days as well. 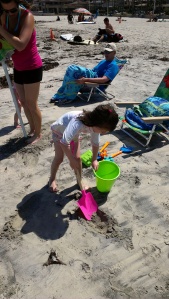 We also went to seal beach one morning to check out all the seals there. 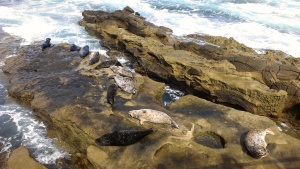 Tuesday we went to the aquarium. It’s a lot smaller than the Baltimore aquarium, but also a lot less crowded, so in some ways much better.

Wednesday we took a trip to the Sand Diego fair. It seemed like a pretty big fair, but we mostly just spent all of our time in the family fun zone or whatever it was called watching my nieces play games and ride rides. We didn’t even eat any fair food like the disgusting sounding fried chicken skin on a stick or bacon wrapped churros.

Wednesday night I met up with a librarian friend who lives in San Diego. We had a delicious dinner looking out over the boardwalk in Pacific Beach. It was fun to meet up with her, and it worked out well since we didn’t manage to run into each other at all while we were both in Vegas a few days later for a library conference.

My poor sister wound up coming down with food poisoning on Wednesday night, so Thursday was kind of a bust with really doing anything. A few of us took my eldest niece to the beach, but that was about it.

I also got to spend a lot of time playing hide and go seek, or find the hidden stuffed animal, and coloring while I was there. I know you will be shocked to hear that the 2 year old was not very good at playing the hiding games. She would hide with you and then giggle the whole time or try and show you where the hidden animals were. I thankfully did not have to play Barbies a single time while I was there though. I am not a fan of playing Barbies now that I am an adult.

It was a fun trip, and I enjoyed getting to see my family. With them living across the country now I don’t get to see them nearly enough.