Paul and I went up to New York City for the weekend to spend Easter with his sister and her family including our 3 year old niece and nephew. It was a beautiful day on Saturday, so after lunch we headed over to Central Park. There are no shortage of playgrounds for them to play at. I think I’ve now been to 5 different ones with them. 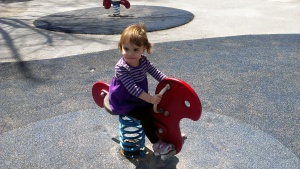 They colored some Easter eggs. 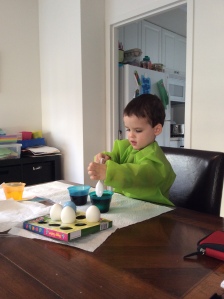 Ryan and Uncle Paul draw on Uncle Paul’s tablet while Lily and Daddy take a nap.

We were still asleep when they found the goods that the Easter bunny left for them, so here are some pictures of the aftermath. Ryan had apparently adopted the giant ducky at the Duane Reade and would say hi to him every time they went in. After the “Easter Bunny” bought it, Ryan went looking for it and was sad that he couldn’t find it in the store. Luckily for him the ducky lives in his apartment now thanks to the Easter Bunny.

I don’t have any pictures of the plastic egg hunt, but apparently Lily refused to believe that there weren’t more eggs hidden around the apartment that she wasn’t finding. Also true to form she is the only 3 year old I know who was more interested in the eggs that had quarters in them than the ones with the candy. Ryan on the other hand was very interested in the candy. He collected all of it and put it in the bag he is riding around on his big wheel with.

Where did Lily go? I wonder what the magician will pull out of his magic hat?

Where did Ryan go? 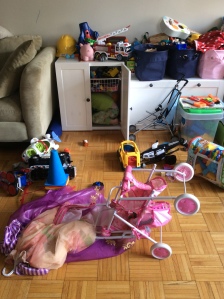 Do you see him now? 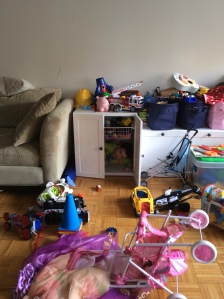 After Easter brunch we took another walk through Central Park. Ryan had fun using a giant tree that had fallen over as a balance beam. 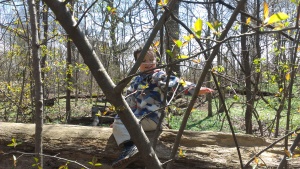 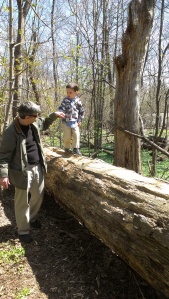 Lily was more interested in picking “daffodils”. I pointed out the actual daffodils that were growing all over the park to her and then she kept calling all the flowers daffodils.

It was a lovely spring weekend in New York. Stay tuned tomorrow for my review of Violet, the Broadway show we saw on Saturdya night.