This weekend was supposed to full of holiday fun. Saturday definitely was, but lousy weather conspired to ruin my Sunday plans. Every year for the past 10 years one of my groups of friends has held a “Winter Wonderland” party at some point during December. For the past 9 years we have rented out the upstairs room at Max’s Taphouse, a great beer bar in Baltimore. Alas, times have changed. We have all gotten older. We don’t drink as much, and many of my friends now have kids so continuing to hold the party at a bar wasn’t really a good option for us anymore. After we had such great success at holding our friend’s surprise 40th birthday party at the Women’s Industrial Kitchen we decided it would make a fine replacement venue. We had a great time with lots of delicious food. Though the main food of the party was catered several us brought desserts. In my continued efforts to bake my way through my Booze Cakes cookbook I brought eggnog cream cupcakes. They were delicious.

This party also always features a white elephant gift exchange. Paul and I managed to be the last two people choosing gifts so we got our pick of the lot and thus came home with some actually pretty decent presents as opposed to some of the crap we have brought home in the past. I often just stuff it away in a cupboard and wrap it back up to bring the next year. The gift I brought this year was definitely recycled from last year. This year I got seasons 1 and 2 of The Shield and Paul got four of the Harry Potter movies, so not too shabby.

Since we were already downtown I decided it would be fun to walk down to the Inner Harbor to check out all the holiday fun going on there. This year for the first time they have a German Christmas Market set up, which I wanted to check out. I have never been to an actual Christmas Market in Germany, but I have been to one in Chicago and this was pretty pathetic in comparison to that. I’m sure it is laughable compared to the ones actually in Germany. There are some outdoor stalls you can visit for free, but if you want to go to the indoor area you have to pay a cover charge on the weekends. It’s still free during the week. I think it’s normally $5, but when we were there they were doing dollar days for attractions in the Inner Harbor so it was only $1. I would say it was worth $1, but I’m not sure it would have been worth $5. There are more stalls on the inside as well as some tables for you to enjoy your food and drink at. There was also a band playing. One would expect they would either have been playing Christmas music or German music, but one would be wrong. As my friend Darra said nothing gets you more in the mood for Christmas than the listening to the song “Doin’ the Butt”. I’m not sure what was up with that. I imagine they have different bands cycling through though so perhaps if you go you’ll get someone a little more festive.

The past few years they have also done a light show on Power Plant buildings in the Inner Harbor at the top of every hour in the evenings. We rarely go to the Inner Harbor and had not been down there to see it. It’s definitely not worth making a special trip for as it only lasts about 5 minutes, but I’m glad we were down there to see it once. You can kind of see the fireworks shooting off one of the buildings in this picture. We were watching from across the harbor closer to the German Market. It probably would have been better if we were closer and could have heard the accompanying music. 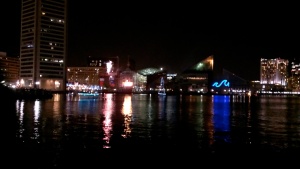 The other fun thing going on in the Inner Harbor on Saturday night was the annual Lighted Boat Parade. We tried to watch it one year from Fell’s Point and it was not enjoyable. I’m not sure what happened that year. The boats seemed to be few and far between. I’m not sure if we just didn’t wait long enough for them to get close to us or if they had gotten too separated from each other, but it was freezing cold and I was tired of waiting to see what only seemed to amount a couple of boats with lights sailing by at quite a distance. I assume it is actually a viable place to watch normally given how many people were down there waiting to watch, but based on this year’s experience the Inner Harbor is a much better place to see it from. This year was much, much better and I’m happy that our time down there coincided with getting to see the boats. Based on this year’s experience I might actually try to go again in future years. Here are some pictures of some of the boats.

I wouldn’t necessarily say that any of these events was worth making a special trip to the Inner Harbor for, but in combination it was a great evening activity. Also if you’re already in the Inner Harbor for some reason you might as well check out the light show or Christmas Market. Obviously you missed the boat parade for this year, but there’s always future years for that.

Sunday was supposed to continue my holiday fun with Baltimore’s Mayor’s Christmas Parade and tickets to see White Christmas at the Hippodrome. Sadly stupid snow and ice ruined our plans for both of those activities. My friend Carissa had a pre-parade brunch planned, which still went on despite the lack of the parade itself. It was a hot dish (i.e. casserole, in case you too are not from the midwest and had no idea what a hot dish was until it was explained to you) brunch, so everyone brought a delicious hot dish to share. Since I’m more of a baker I decided to bring a chocolate cherry croissant bread pudding. I had a lot of the cream that went in the cupcakes, so I’ll be honest and let everyone know that I cheated and instead of making the bourbon sauce that was supposed to go with the bread pudding I just brought the leftover cupcake cream. Everyone thought it was delicious and would never have known my secret if I wasn’t outing myself here.

Since there was no actual parade we went out and walked around the neighborhood and played in the snow for a little bit. Then we came back and the ladies worked on a puzzle while the gentleman watched football. I stuck around long enough to finish the first puzzle, but left before they started working on the second puzzle. I saw on Facebook that they finished that one too. It was fun, but I’m still sad that they canceled the parade for the first time in 41 years. It’s the best parade ever because it is so random and so fun. Macy’s has nothing on this parade. I’ll just console myself by looking at pictures from past years and thinking about what might have been.

As I mentioned we also had tickets to see White Christmas as part of our season ticket package to the Hippodrome in Baltimore. I gather that the show did go on, but looking at the sheet of ice that our street was at the time we were supposed to head out to the theatre we made the hard decision to stay home. As much as I wanted to see the show it wasn’t worth us getting in an accident over. It was the disappointing, but smart move.

Stupid winter weather of the worst kind. Winter weather is only good to me if it doesn’t ruin any fun plans, doesn’t occur on a weekend, and gets me out of work. This storm did none of those things for me, so it was the worst. Now I’m just hoping this second round of snow they’re starting to predict tomorrow doesn’t ruin my plans to go see a live taping of Pop Culture Happy Hour tomorrow night. Then I will be really mad. I’m not putting too much stock in forecasts just yet though. If there’s anything I’ve learned in the 13 years I have lived in Baltimore is that our meteorologists have no idea how to forecast winter storms here. I get that it’s very difficult because we’re usually positioned right along the rain and snow dividing line, but it does make their predictions seem laughable when we routinely get no snow when they’re predicting a lot or way more than expected. Take for example yesterday when we were told to expect about an inch of snow before it changed over to sleet and freezing rain. At our house we wound up getting about 5 inches of snow and those north of us got 8 or 9 inches. So I take all forecasts for snow and ice with a big heaping handful of ice melt.

One thought on “Holiday Weekend Fun”