This weekend was full of fun activities that I’ll be blogging about over the beginning of this week, so stay tuned for more. Friday, a big group of friends (about 20 or so of us) got together to tackle the Rodgers Farms Corn Maze on one of their flashlight maze nights when the maze is open after dark and you traverse through it via the light from your flashlight. We won’t talk about the fact that they call it a corn maze instead of a maize maze. I mean really. Even though I really wanted to go, I was whining about how cold it was going to be out there. I dressed appropriately and it wasn’t that bad. At least one person made fun of my heavy winter coat, but I was comfortable the whole time whereas I heard other people complaining that they were cold by the end of the night. So I ask you who is the silly one in this situtation?

This year’s maze was Baltimore Orioles themed as you can see from the maze map. If you’ve never been in a corn maze the goal in addition to finding your way out again is to collect things at various points in the maze. In the couple I’ve been to its involved either getting a punch or  stamp on your card at each station. You can see the punches I got on the bottom of my card. This maze also had some side game going called Farm Scene Investigators, which I think was some sort of Clue type game but none of us really understood what you were supposed to be doing with that game so we just the extra punches on the side of our card and moved on. 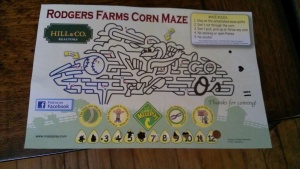 Since there were so many of us we broke in to smaller groups. Some of the guys were trying to make it a serious competition with times between the groups and making sure there were even numbers of people on the teams. Their efforts broke down quickly as my team had way more people on it than it was supposed to and we didn’t time ourselves. I was happy to have some people on my team who were good at reading the map, as this is me trying to follow a map.

I didn’t even bother trying. I just stayed in the back and followed the people in front of me who seemed to know what they were doing. Last time I was in a corn maze I feel like we wandered around aimlessly forever. I also don’t remember having a map that time either though. At any rate this time we were definitely following the map and consequently got out much faster.

After we found our way out of the maze we headed back to my friend Christin’s apartment to enjoy some delicious pumpkin cake, pumpkin bread, hot chocolate, and hot apple cider. A delicious way to end a great fall evening.