For the second year in a row my husband and I headed up to Rhode Island for the Newport Folk Festival. As I mentioned last year his sister lives up there, so we have a place to stay while we’re there. She also kindly shuttles us to and from the Jamestown ferry each day, which is by far the best way to get to and from the festival unless you have your own private boat, which sadly we don’t. It’s a huge travesty that I own neither a boat nor a lake house.

This year the festival expanded from 2 days to 2 and 3/4 days with the festival also running on Friday though starting later in the day than on Saturday and Sunday. We flew into Providence on Friday morning arriving around noon and then went straight from the airport to the ferry. It worked out perfectly as we arrived at the festival about a half hour before the music started.

One of the other changes they made this year was blocking off an area in front of the main stage for standing and dancing only. Though I never entered that space I applaud the decision. Newport is a really chill festival where you can go park your stuff for the day in front of the main stage and then leave it to run around to all the other stages. In the past what that meant was that the front of the main stage could be littered with empty chairs and blankets, which makes it less enjoyable for the people who want to get right up next to the stage and dance and I imagine less enjoyable for the performers whose immediate audience is lawn furniture. The area was pretty much full the entire time, and it made for a better time all around I think. 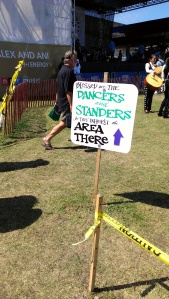 Unfortunately what did not work out perfectly was the weather. All the weather forecasters were telling us that the rain in the morning was going to move out in the afternoon, instead it did the exact opposite of that. When we arrived the rain was a fine mist or light drizzle on and off so I figured it was ending and it would clear up for the later acts. Ha, was I wrong. We saw the first act relatively dry, but then it was a pouring relentless rain for the rest of the day. Not exactly enjoyable outdoor concert weather. I came prepared with rain gear but even wearing a hooded waterproof jacket with a poncho over it plus holding an umbrella I was fairly soaked by the time we left.

Despite the crappy weather, the music was great. We spent the whole day just sitting at the main stage listening to the bands there. I had thought about going to one of the other stages to hear Phosphorescent, but the rain made me not want to move so I didn’t. NPR Music was recording many of the sets and are putting archives of a bunch of them on their site, and that is one of them so at least I can go back and listen. I’ll be referring you to their links for any of the shows I’m talking about in case you want to listen.

First up on the main stage Friday was Kingsley Flood. I had not ever heard of them prior to the announcement that they were part of the Newport Folk Festival lineup, but I enjoyed listening to them on the Spotify playlist I made of bands playing the festival. It turns out they were my favorite act on Friday, though a smidge of that might be related to the fact that they were the only band we saw play without being pelted by rain. I really like their music, and they put on a great high energy show. I’ll definitely be keeping my eyes and ears on them in the future.

Next up was JD McPherson. Though he was born in the late 70s he plays old school 1950s rock and roll, which I feel like is making a bit of a comeback as Alabama Shakes also has a lot of those influences in their music. I’ve been digging his stuff for awhile and enjoyed getting to see him play live.

The final act we saw on Friday was Feist. I suspect I would have enjoyed the Feist set a lot more had I not already been sitting in the pouring rain for 2 hours. By the time she took the stage I was cold and wet and ready to leave. I was determined to at least make it through her set though. She definitely was very high energy and was trying to get the crowd into it, but I unfortunately was more focused on how miserable I was than her music. If I had been watching her at any other point I suspect I would have thought she was fantastic. It does not appear that an archive of her set is up on NPR’s site.

We originally planning on staying for Old Crow Medicine Show as well, who were the headliners for Friday, but I barely managed to stay through Feist so we bailed before their set. I’ve seen them live before and they’re lots of fun, but I was ready to leave so we cut Friday a little early.

Stay tuned for Days 2 and 3 of the Newport Folk Festival.