It’s one of those polite conversation things for people to ask you where you are from when they first get to know you. When people mean where do I live now I can easily answer Baltimore. However, often this question relates to where you grew up. For that I have no easy answer. We moved a number of times when I was growing up, so there is no single place that I call “home”. I was amused to see my sister update the hometown section of Facebook the other week with one of the places we lived as I wouldn’t even begin to try and decide what I considered my hometown.

That being said the closest thing I probably have to a hometown is not somewhere I’ve ever lived for any amount of time. I lived there for about 8 weeks the summer after I graduated from college, but that is all. The place I’m talking about is Amelia Island, Florida. It is a place I’ve had a connection to since 1989 when my grandparents moved there. At the time we lived outside of Atlanta and could easily drive there so we spent many vacations and long weekends visiting my grandparents there until we moved to Massachusetts in 1991 and then Texas in 1994. We weren’t able to visit as much after those moves, but were still there several times a year. I went to college in North Carolina, which once again put Amelia Island within driving distance. Meanwhile my parents were moving once again, this time to Illinois, so it was often easier for me to drive down to my grandma’s house (my grandpa passed in 1991) than to go wherever my parents were during breaks unless they too were visiting Florida.

My senior year in college my parents decided to buy a second house on Amelia Island (they actually own the house my grandparents lived in) where they intended to move. My sister wound up living there alone while she went to college at the University of North Florida. Then I moved in with her for the summer after I graduated from college before my move to Baltimore. Their house got featured in the movie Sunshine State, which was mostly filmed on Amelia Island. My sister, who was the only one living there at the time, got paid to leave all the lights in the house on. The house looks kind of funny to me now since the movie was filmed prior to my parents adding the pool. You can see the house in this short clip from the movie in the link below.

[Sorry I couldn’t get the video to embed. WordPress won’t let me upload a video to their site unless I pay them, and I don’t want to do that for the rare case I want to put my own video on this blog. I also consider it a fair use to put this short clip on my blog in this context, but it wouldn’t be a fair use to put it on YouTube, so I’m serving it off my own server. The video would easily embed if I was throwing up a link from YouTube, but I’ve tried using all kinds of file types and embed codes and WordPress won’t play nice with my link to the video. Ok, sorry. End rant of the crazy librarian who works with digital media and copyright for a living.]

My parents finally moved to the island in 2001. With both my parents and grandma living there Amelia Island became my defacto home without me having grown up there in the real sense of the word. It is where my husband and I chose to get married. We had our ceremony on the beach by my grandmother’s house and our reception outside at my parents house. 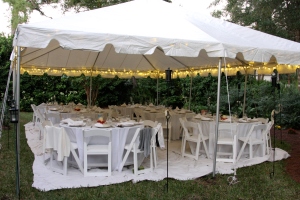 Amelia Island holds a very dear place in my heart. It is the single place I’ve had a connection to the longest in my life, but today that changes. As this posts movers are moving the stuff out of my parents house as they sell their house and move across the country to Arizona to be close to my sister and her kids. Technically they still own my grandma’s house, but they rented that out last year to long term renters and have just renewed the lease so for the foreseeable future there would be nowhere for me to stay on the island if I went down there.

Aside from the fact that my parents have taken away my annual free (except for the price of an inexpensive plane ticket) beach vacation, I’m sad that this place that has been a kind of constant in my life since I was 10 years old in a way that no other place has is no longer really going to be part of my life for the time being. I had no idea when I went down there for my grandma’s funeral in January that it would be the final time I would be there at least in the short term. Usually I would be thinking about which week in July or August I wanted to go down there to visit my family and go to the beach. It feels odd to think that I won’t be doing that this year.

I have so many great memories of going to the island to visit my grandparents and my parents. I’ve taken so many friends there over the years. I have fond memories of all of those vacations. The island and especially its surrounding areas have changed so much since we first started going down there. I’m sure they will continue to grow and change, and hopefully one day in the not too far off future I’ll be back to see how Amelia Island has grown.