My husband’s sister, her husband, and their 2 year old twins came down for the Easter weekend. Our first stop after lunch was a trip to our local park. Ryan climbed all over the stegasaurus.

Lily climbed up the rock wall to get to the slide. She eventually was doing it by herself quite well.

The slide was also a big hit with both kids. 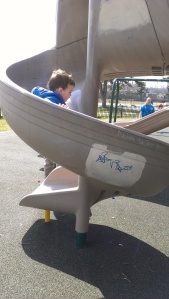 Speaking of big hits, the stairs  in our house were the highlight of the weekend for Ryan and Lily. Like every other 2 year old I have ever met they were obsessed with the stairs. They spent lots of time sitting on them, playing on the bottom few steps, and then trying to make a break for it climbing up them when they thought they could get away with it.

Lily puts her bunny to bed on the stairs. 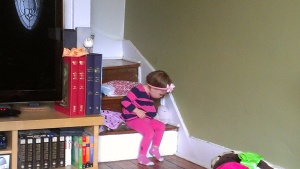 Uncle Paul plays baby gate to keep the kids from getting up the stairs. 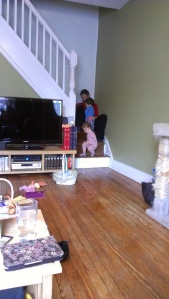 Sunday morning of course started with a visit from the Easter bunny. 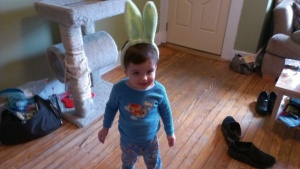 Ryan was also really excited about our cats. The cats were maybe a little less excited about him. Scout was a good sport though and hung around the whole weekend letting him pet her. Charlotte wanted absolutely nothing to do with the whole situation and hid in the basement the entire weekend. She likes people, but only when they are calmly and quietly sitting around. Needless to say that does not describe two year olds.

Lily was more obsessed with her Uncle Paul, asking where he was every time he left the room she was in, but she also pet Scout a couple of times. 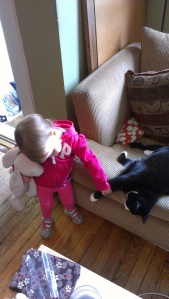 Rain ruined our plans to go to the Easter egg hunt at the zoo, so we hit the little park on our street for awhile in the morning and then they left around lunch time.

One thought on “Easter Weekend with the Twins”