Yesterday my husband and I went down to DC for our friends wedding.  I’ve been to a lot of weddings and all of them have some touches that reflect the personalities of the bride and groom. However, both this wedding and the last wedding we went to previous to this one were both memorable for how well they encompassed who the couple is. The two weddings could not have been more different in how they accomplished that feat because the couples themselves are very different, but I appreciate how much work they went to make their weddings truly unique for them.

Ed and Kate live in DC and very much love their adopted city, so it was only fitting that they got married in an historic DC hotel within shouting distance of the Capitol.

Ed is a friend my husband met online long before most of us probably knew what the internet even was, so you know there’s a lot of technology nerd there. Hence the fact that there was an official hashtag for the wedding and people were encouraged to live tweet the ceremony. Even the groom took part tweeting this picture right as the ceremony was starting. 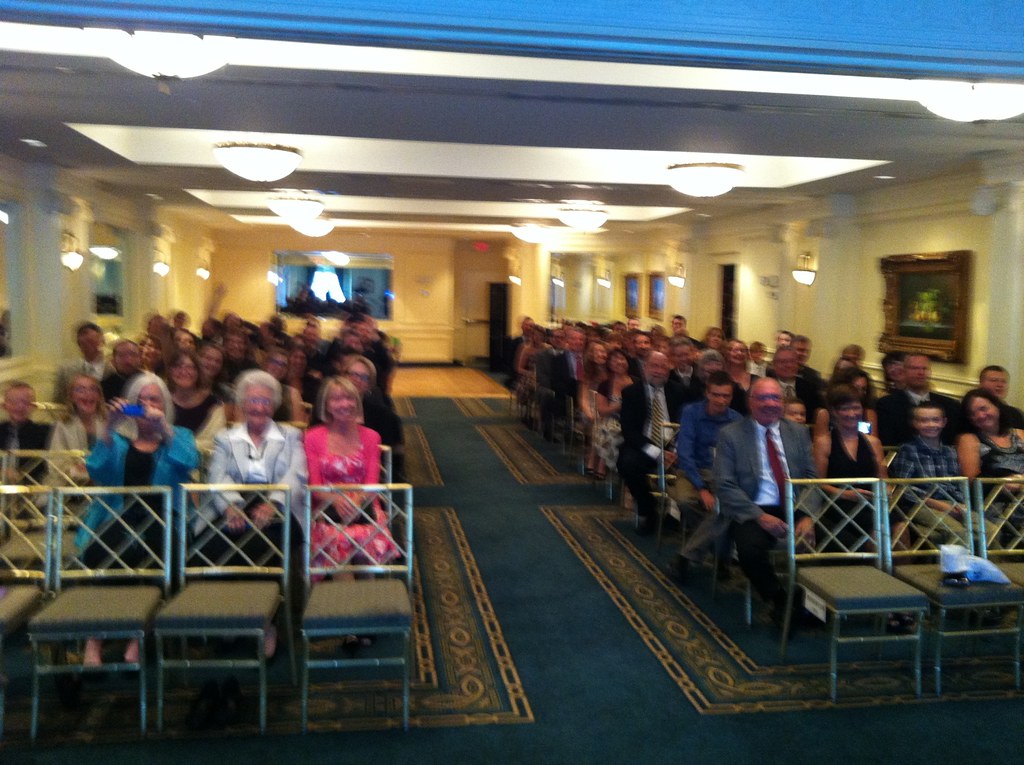 The tenor of the music for the entire evening was set from the very beginning with music for the ceremony. With Ed coming out to “Top Hat, White Tie, and Tails” from the Fred Astaire movie “Top Hat” and the rest of the wedding party processing to “Take the A Train” by Duke Ellington and Ella Fitzgerald. I have zero recollection of what the bride actually processed to or their recessional song, but I’m sure you get the drift. This was the type of music being played the entire night. None of your usual wedding music being pumped out by a DJ. Instead a playlist thoughtfully put together by the bride and groom that very much speaks to who they are.

The ceremony featured a reading from Sandol Stoddard Warburg’s “I Like You” performed by three of their nieces, which seemed very fitting. One of the most unique things about the ceremony though was their unity ceremony. A lot of people use unity candles. I got married on the beach so my husband and I did a sand ceremony. Ed and Kate, who are huge lovers of cocktails, actually did a unity ceremony featuring the creation of a cocktail. I suspect that is the first and only time I will see that at a wedding.

Their love of cocktails was also evident in their decorations. The table centerpieces were made using bitters bottles

and their cake toppers were little bottles of champagne.

One of the groomsmen gifted the bride and groom at bottle of Malort, which apparently some awful whisky(?) that is difficulty to find outside of Illinois and is preferred by bikers in the state. I was just amused by the label which read “It’s bitter taste is favored by two-fisted drinkers” including the erroneous apostrophe. Classy. Based on the faces the bride and groom made while tasting it, the label is definitely the best thing about it.

Speaking of the bride and groom here they are.

And here they are enjoying their last dance.

Wait you didn’t think the wedding festivities ended there did you? After the official wedding, the party moved over to The Passenger, which is a bar in DC and one of their regular haunts. There a second ceremony full of ridiculousness performed there.

It was complete with another cake this time featuring a Lego cake topper.

It was a lovely wedding that was a perfect reflection of the bride and groom.

2 thoughts on “The Poebelack Wedding”