One of my favorite meals during the summer is a simple tomato, mozzarella, and basil sandwich. We used to buy rosemary focaccia from one of our local grocery stores to make these sandwiches on. However, that grocery store has since gone out of business. The remaining grocery store in our neighborhood has also started selling rosemary focaccia, but pretty much everything that comes out of their bakery is sub-par. Their bread is really dry and detracts from the sandwich rather than adding to it, so after a few failed attempts with that we gave up on focaccia bread. There are three different local bakeries that sell bread at the farmers’ market we go to every week, but for some reason none of them sell focaccia bread. We’ve tried various other types of bread from the different bakeries, but none of it worked out really well. It’s not that the bread didn’t taste good. It’s just that the bread is not appropriate for use in these types of sandwiches. It has all been far too chewy and crusty making the sandwich super difficult to eat.

After yet another disappointing sandwich last week, I decided it was time to take matters into my own hands and give making my own focaccia bread a shot. I googled around a little bit and found this recipe for rosemary focaccia. It seemed simple enough, so yesterday I gave it a try. The results were excellent if I do say so myself. The bread was exactly what I was looking for and made a superb sandwich for my dinner last night. It was very simple to make though time consuming. Most of the time needed is  hands off, but because the bread has to rise twice, you really need a good stretch of 3-4 hours from start to finish. Thus it’s something I’ll need to remember to make time for on the weekends if I want to have any during the week, but I’ll definitely be baking this again. The one adjustment I would make is to use a finer grained sea salt. The recipe calls for course sea salt, which I used. We also have a slightly finer grained sea salt in stock as well, and I think I’ll try that next time as I occasionally hit a big chunk of salt with it as is.  I might try and play around with different toppings for it as well at some point. It was definitely a successful experiment that will bring joy back to my tomato, mozzarella, and basil sandwiches. 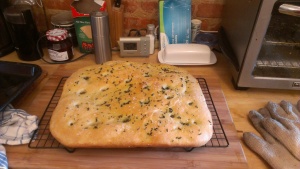