My husband and I throw a New Year’s Eve party every year. Incidentally New Year’s Eve is also his birthday, so I always make sure to try and celebrate that as well as ring in the new year. As I alluded to in a previous post, 34th Street in our neighborhood plays a fun part in our New Year’s plans. The owner of the house who started the Christmas light tradition on the street extends his holiday cheer into the New Year by also being the mastermind behind what is now a Hampden New  Year’s Eve tradition. I don’t have a picture of it, but every year he dresses up as Baby New Year. Imagine a hefty man with a handlebar mustache dressed in nothing but a diaper, baby bonnet, and sash that says Baby New Year. He was rather elusive last night so none of us got a picture this year. He also has set up in front of his house a little ball to drop at midnight, which you can see in the picture below. (Full disclosure the picture in this post is actually from 2 years ago. I didn’t get any from last night that show the ball.) Don’t see the ball? It’s that tiny little round thing to the left of the street light. Almost as awesome as the ball the drop in Times Square every year, I know. It’s a really fun neighborhood thing. About a quarter to midnight you just see people streaming out of people’s houses and bars from all over the neighborhood heading down to 34th Street. People start to disperse pretty quickly once it’s over too. I think the warm weather we’ve been having encouraged more people to come out last night because it was definitely the most crowded I have ever seen it. Someone was also setting off some highly illegal fireworks at midnight which added to the festivities. Thanks to all my friends who came out to help me celebrate and ring in what will hopefully be an excellent 2012.

My friend Tracie sent me this photo from last night after reading this post. It’s a great picture complete with the lit up 2012 and Happy New Year sign. Thanks Tracie! 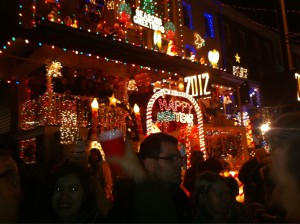